Hello I purchased the SPD-CT660B9 from you and need to know how to hook up the on off switch to the new controller.  There are different plugs from the original speed controller than the new one and want to make sure i know which plug to purchase.  Please see photo and let me know what is the best way to get new speed controller hooked up to the on/off switch and if any other parts are needed to ensure i can get this overvolted and ready to go.

The wiring diagram is attached.

Please note this is for the Dune Buggy version 1-11 and not for version 12 and up.

I am looking how to convert the existing power switch connection to the new controller as the plugs are different, is there a connector I need or do I just cut and reconnect the old male/female prong pieces?

You could either use a connector that matches the one on the controller, or the wires could be cut and spliced.

Both methods work equally well however there is an advantage to using connectors because then if the controller ever needs to be replaced in the future it can be done very easily by unplugging the old controller and plugging in the new one in.

The connectors that match the controller are what we call on our website "White Connectors" and they are available on this page:

To install these connectors either requires soldering the wires onto their terminals, or using a special solderless crimping tool designed specifically for these connectors which is available at the bottom of the page that the white connectors are sold on. 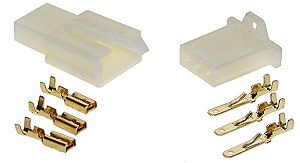 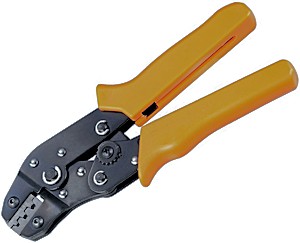 If I am overvolting this with the 3rd battery, what do I do with the fuse that is currently hooked up to the 2 batteries?  Do I need the fuse and if so, how do I hook up and what amp fuse is needed?

said over 7 years ago
At least one fuse should be installed between the battery pack and speed controller for circuit protection. The CT660B9 controller can be used with a fuse rated up to 40 Amp, however that would require 12 gauge wire between the controller and all of the batteries. If the Razor Dune Buggy's original 14 gauge wire is being used then the maximum size fuse size should be 30 Amp.

The existing fuse and fuse holder could be reused on the new battery pack if as long as it is used with a 30 Amp or smaller fuse. If upgrading to 12 gauge wire in order to use a 40 Amp fuse then a fuse holder with 12 gauge wire should be used.

You may want to start by running the Dune Buggy with a 30 Amp fuse and see if it runs without blowing out the fuse. That way if it works with a 30 Amp fuse, then you will not need to upgrade the wiring and fuse holder to 12 gauge in order to use a 40 Amp fuse.

said over 7 years ago
Ok got it. I also noticed a few other plugs don't match from the stock speed controller and the new 36V controller, can you tell me which ones to purchase from your site? I just placed order for the cnx-52 plugs for the key switch but there are 2 other plugs that don't match to the buggy

said over 7 years ago
Here is the information regarding which connector item numbers the Razor Dune Buggy wiring harness and SPD-CT660B9 controller use. 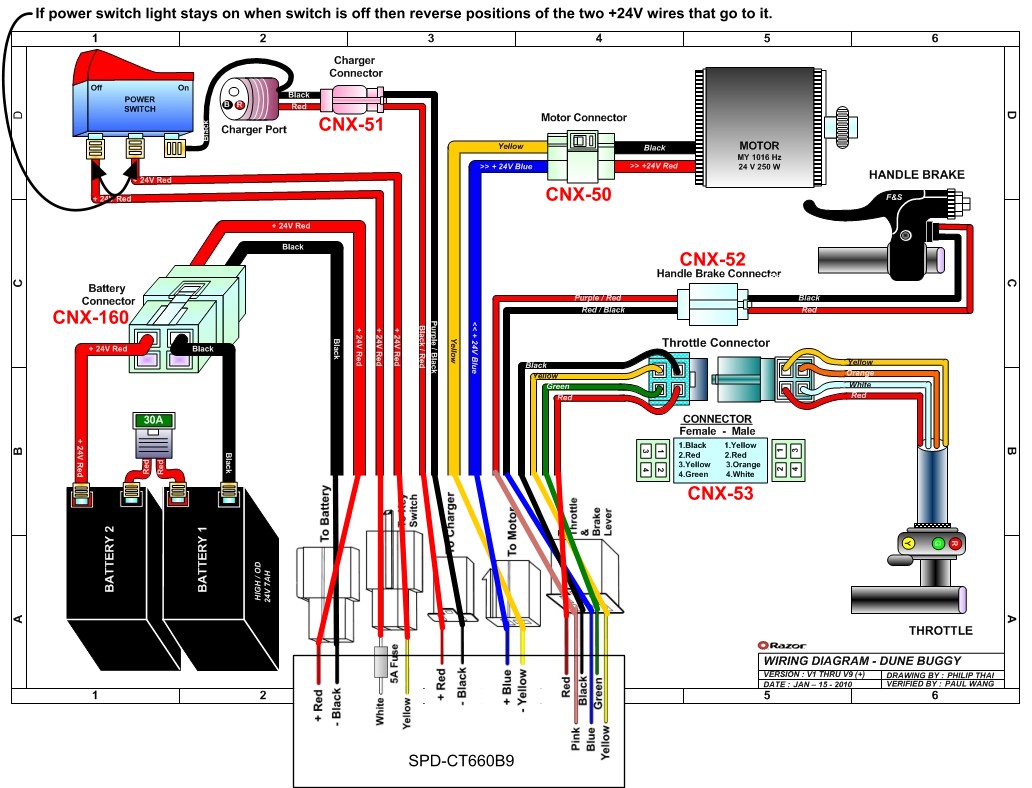 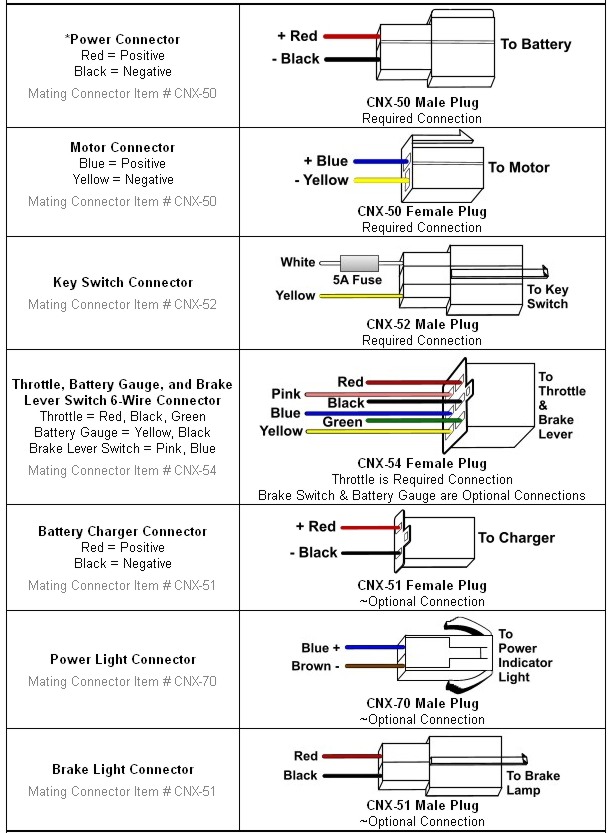 Hello, so I have everything not set up however a few hiccups as I blew a fuse on the key switch connector and obviously it was due to wiring not being set up properly.  I have swapped the power switch wires properly and looking at the wiring harness on the new speed controller and the existing harness on the dune buggy, the wire colors don't match up as there is no "orange color wire" as indicated in your diagram.  I assume that the orange would be the brown wire that I have on the razor harness - correct?  Also, I have a blue wire on each of the new harness and the razor wire harness so are the blue wires supposed to match up then?  I have attached the current wire harness so you can see the colors I am referencing, I just need to make sure these line up properly before trying again.  Thank you for your help

I just checked with Razor and there is a new Version 12 Dune Buggy that has a 6-wire throttle which must be the version that you have because I can see 6 throttle wires in the attached photo.

Ok sounds great.  So as long as the 3 wires listed are not connected  we should be good to go.  I will try it that way and let you know the status.

Thank you for all your help, until next time!