Razor Dune Buggy sluggish even with near full battery

started a topic almost 7 years ago

I recently upgraded a Razor Dune Buggy with a 36V 500W Motor, extra 12V battery pack, and a new controller. Once fully charged, I noticed the buggy does not run more than 10 minutes.  At around that time, the buggy becomes slugglish and slows to a crawl. When I measure the battery, it registers 36V. After waiting a couple of minutes, the buggy becomes fast again but for about 5 seconds worth of riding.

Why is the buggy behaving like this? Could it be a bad controller?  I can't seem to figure this out.

Speed controllers typically either perform at 100% of their performance level or they do not work at all, and since the Dune Buggy is running at first then you can safely rule out the speed controller as not working.

From what you described it sounds most likely to be a problem with the battery pack. A 36 Volt battery pack should be at around 41.4 Volts when fully charged, so if it is only at 36 Volts after being charged that indicates a problem with it. When the power going to a 36 Volt speed controller drops under 32 Volts the controller will turn off which is what it sounds like is happening.

After a battery pack has been in use its Voltage level will drop, and then after it has not been in use for a few minutes its Voltage will start to increase, which explains why after waiting a couple of minutes the Dune Buggy will run again for a few seconds.

said almost 7 years ago
Thanks for your reply.

I did charge the 3 batteries individually with a 12 Volt SLA battery charger.

Once full, each did read roughly 13.8V. I then took it for a spin yesterday. It lasted a good 10 mins I would say?...then the buggy slowed to a crawl again.

I will try ordering 3 new batteries and try again. What's funny is that these 3 batteries run fine on my ecoSmart Metro (where I pulled the 3 batteries from). On the ecoSmart, I can ride continuously for 20 mins before it shows any signs of slowness.

But just to be sure, I will go ahead and order 3 new batteries. If the buggy behaves the same with new batteries, what could be next?

BTW, just FYI..I'm using the stock 24v throttle on my 36v controller/motor/battery configuration. Would this be a problem? The LED lights on the throttle does not come on, but I'm able to ride the buggy in variable speeds with no issue.

Using a 24 Volt throttle on a 36 Volt controller, motor, and battery pack will not have any negative effects on battery performance. The throttle runs on a 5 Volts signal from the controller which remains the same no matter what the Voltage of the controller is. The only downside to using a 24 Volt throttle on a 36 Volt system is the the throttle's battery level meter which runs off of the full Voltage of the battery pack will not work properly.

If the Dune Buggy's jackshaft has been bypassed then here is a link to our gear ratio calculator for vehicles without a jackshaft:

If the jackshaft is still being used then here is a link to our gear ratio calculator for vehicles with a jackshaft:

Both of these calculators will calculate the Top Speed which is the number to look at. The Razor EcoSmart has a top speed of 18 MPH with its 500 Watt motor. So for a modified Dune Buggy with a 500 Watt motor the top speed should also be around 18 MPH in order for its battery pack to perform the same as it does on the EcoSmart. If the top speed calculation is higher than 18 MPH on the Dune Buggy then the motor is most likely being lugged which is causing the battery pack's power level to run down faster than it does on the EcoSmart. 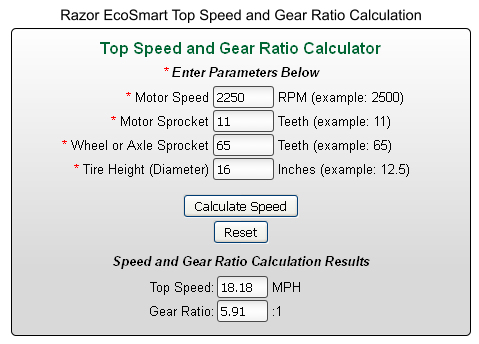 Hello. Would you please tell me more about the "jackshaft".  What is the purpose of it? Is it advantagegous to remove it? When I added the new motor and extra battery pack, I did not mess with the jackshaft or gears.  Please tell me more!

The jackshaft is used to reduce the gear ratio lower than could be achieved without it. Without the jackshaft the original 250 Watt motor would be geared too high and would not function properly. It is only advantageous to remove the jackshaft if the gear ratio without it is works with the power of the new motor and the conditions that the Dune Buggy will be used in.

Since you have not removed the jackshaft the Dune Buggy's gear ratio is not too high, and should not cause the battery pack to deplete faster than it does on another vehicle with a 500 Watt motor.

said over 6 years ago
Oh I see. So having the jackshaft, I'm able to ride the buggy on more rugged terrain like grass..etc. instead of just flat paved surfaces.  I guess as long as having it vs not having it does not affect the battery range, I'll leave it alone.  I care more about battery time than speed.

Do you know if a LiFePO4 battery pack will work on my buggy?

It should right, since my controller/motor is rated for 36v. Would this be a simple swapping out of the 3 heavy 12v lead acid battery packs?  Would this battery help gain the ride time or will ride time remain the same?

The lower the gear ratio is the less power the motor will consume so that will help with increasing the ride time. If the jackshaft was removed and the buggy went faster then there would be more wind resistance (drag) which would cause the motor to consume more power and lower the ride time.

All 12Ah battery packs should provide the ride time as each other no matter what type of batteries they are. That is what makes battery Ah ratings so useful. The only stipulation between the difference in ride times between a 12Ah lead acid and 12Ah LiFePO4 battery pack is at what Voltage the battery pack will safely discharge to.

said over 6 years ago
Thank you for your response. My objective is to increase the ride time. Right now, I'm getting about 15-20 minutes. If I can get it to 30-35 minutes, that will be awesome.

I did not know lowering the gear ratio will help. Originally, I thought the heavy lead acid battery...if it can be replaced with a lighter solution, I might be able to improve the ride time.  I didn't know the lighter LiFePO4 battery will result in same ride time.

I heard buying 12V battery with a higher AH number will help with ride time too. Is that true?  Do you have a formula to calculate the difference from a 12v10ah to a 12v 12ah for example?

How easy would it be to lower the gear ratio on my buggy? I am not sure how to remove the gear from the motor head. I did not know this is possible! :)

I did not consider that by reducing the weight of the battery pack the load on the motor would be reduced and ride time increased. With a lighter battery pack I would expect a slightly longer ride time, especially if the cart is used to go up inclines or is frequently used for stop and go driving.

The gear ratio can be lowered by installing a smaller sprocket on the motor, or a larger sprocket on the jackshaft or axle. Sprockets can be removed from most motors by removing the nut and washer that holds them in place, replacing the sprocket, and then reinstalling the nut and washer. The nuts on most electric scooter and go kart motors have left hand threads and need to be turned clockwise to be removed.

However since you are using the original Dune Buggy jackshaft with a 500 Watt motor the gear ratio should be very low already, and not too much of a load is being placed on the motor, so lowering the gear ratio more than it is now may not help to increase the ride time unless the cart is being used to climb a lot of hills.

I understand that you would like to double the Dune Buggy's ride time. One sure fire way to do that is to replace the existing 10Ah battery pack with a new 22Ah battery pack.

I need to do some math to figure out what is the largest size 12v ??AH battery pack I can get in 3 that will fit on the rear right side of the buggy.  I'm currently placing 2 vertical next to each other and a 3rd horizontal right beneath it. The 22AH may be too big and too tall to fit.  I am still using the stock black plastic cover to cover the motor and battery.

Thank you again for all your help and explanation. I've decided not to mess with my gears and just get a bigger battery pack x 3.