started a topic about 5 years ago

I took a look at the ecosmart controller and it says it has a maximum current of 30a. If I have 3 12v 12ah batteries, what kind of problem would that serve?

Also, would I be able to add that controller to a e300?

You can safely upgrade the EcoSmart electric scooter to have three 12V 12Ah batteries without causing any problems or needing to change any other parts on the scooter.

Hmm okay, makes sense! One other thing. What would be causing my ecosmart to slow down around 34v charge? I have a voltmeter and it goes to about 41 fully charged, but when I am riding it really slows down when it hits 34? I weigh 190lb. Also the wheel moves fast if I lift the scooter. Is something broken? My wiring off?

said about 5 years ago
When the battery pack reaches 34 Volts it only has 25% of its charge remaining and this is the point where it starts to lose power and the motor slows down. Here is a percent of charge chart for a 36 Volt lead acid battery pack. 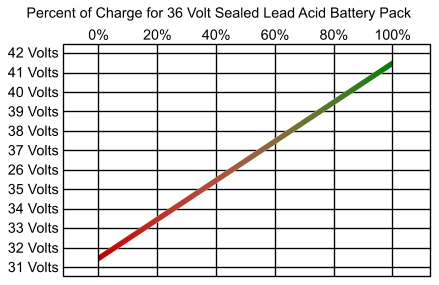 It is normal when the wheel is in the air for it to spin faster than when it is on the ground. That is the nature of brushed electric motors that they spin faster with no load than when they have a load on them. It does not indicate that anything is broken or there is a miswiring.

That makes so much sense!

So if I am planning on adding that motor to a e300, with 2 12v 12ah batteries. What motor sprocket should I buy to help go up hills best? I am probably going to keep the stock chain and wheel sprocket. Also, what kind of run time am I looking with this? Would it be worth upgrading to 36v? My commute is 1.2 miles each way, 1 big hill, but can walk that if need be.

said about 5 years ago
Although advertised as being a 12, 24, and 36 Volt motor it is, in fact, a 36 Volt 500 Watt motor and it would run very slow and not have much power if ran on 24 Volts. So if you were to transfer that motor to an E300 scooter then I recommend upgrading to a 36 Volt battery pack and controller at the same time.

For better hill climbing on the E300 scooter, a smaller motor sprocket and or larger wheel sprocket could be installed. The E300's original wheel sprocket is 55 teeth so you could upgrade it to a 65 tooth sprocket if there is enough room for a larger sprocket without it hitting the frame.

Run time depends on a lot of various factors such as battery size and condition, motor power, terrain, weight, and riding conditions. We have a ride time calculator to help with estimating on this page: https://electricscooterparts.com/battery-pack-calculator.html

Upgrading an E300 scooter to a 36 Volt 500 Watt motor and a 36 Volt battery pack and controller would double the amount of power that its original 250 Watt motor has so it would definitely be worth doing if you want the scooter to have more power.

A 2.4 mile round trip ride with one big hill each direction should be no problem for a battery pack made from three 12 Volt 12Ah batteries as long as the batteries are in good condition.

Starting to think my ecosmart is dying to quickly. 36v, 12ah each. Runs for like 5min... Would this be due to the batteries being dead? The voltmeter reads 44v when charged though.

How do I test if the batteries are still good? So I can decide to buy new ones for the e300 or not.

Old or worn out batteries will recharge to a normal Voltage level however they will rapidly lose that charge when being used.

I'm assuming two of the batteries are bad. If I buy 2 batteries from you guys, will my third battery (bought it 3 weeks ago, charged like 5 times) need to be replaced too? Or is it still good?

It would be perfectly safe to make a battery pack from a battery purchased 3 weeks ago and two brand new batteries. However, since one of these batteries has been used a few times, it should be checked to see if it has the exact same Voltage as the new batteries before installing it along with them.

After a battery has been discharged or recharged then it takes a little while (30-60 minutes) for it to equalize. So after charging or discharging the battery(s) let them sit for a while and retest their Voltages to make sure they are all the same.