How to add an extra battery to a Razor Ecosmart Metro with a switch.

I have an Ecosmart Metro that I want to add an extra battery to for the purpose of more speed. This will make the scooter 48 volts, however I have kids that ride my scooter from time to time and I am worried it will be too fast for them to safely ride. I want to use a switch so that I can use 36 volts for them and then switch it to 48 volts for me. I have seen this done on youtube but the video maker did not say how he wired it up. I have some wiring knowledge but have never done this particular thing. Can anyone post a wiring diagram for this application?

With a switch that changes the battery pack from 36 to 48 Volts, the Voltages between the 36 Volt pack and the additional 12 Volt battery will become unbalanced and if charged with a 48 Volt battery charger the batteries will be damaged due to overcharging and undercharging of the different batteries in the pack. A solution to this is to use a 36 Volt charger and a 12 Volt charger to recharge the four batteries. Here is a wiring diagram for this method: 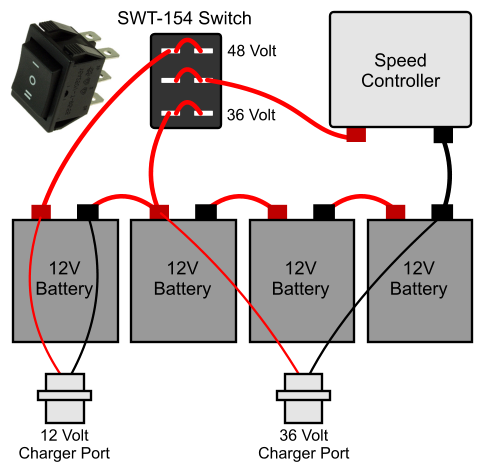 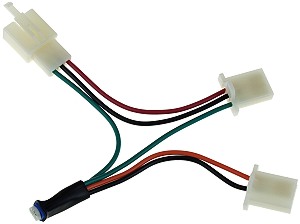 This part goes between the throttle and controller and then a switch connects to it to defeat the lower top speed that can be adjusted from 0-100% and anywhere in between by using a small screwdriver.

The top speed limiter shown above does not have the right connectors on it for a Razor Ecosmart scooter's throttle, however, we could make one that does. The defeat switch connects to the top speed adjuster's black and orange wires.

With the top speed limiter installed a 48 Volt charger can be used to recharge the battery pack and the top speed can be adjusted to any level that you want and then defeated with a switch when you want the scooter to have full power. The defeat switch could even be a key switch to prevent unauthorized or accidental use at full power.

Thank you very much for your response. I would be very interested in purchasing a top speed limiter that would be modified with connectors to use with the Ecosmart Metro. I would also purchase the 48 volt charger to go with it. Can you explain how to use the switch you mentioned to use it at full power? Please let me know how much the modified top speed limiter will be and how to place that order and I will do it as soon as I get the info. Thank you very much!.

The top speed limiter is $9.95. We will make a link to one that is plug-and-play with the EcoSmart scooter right now and reply again with a link to it.

We could include a switch that plugs into the limiter if you could let us know our part number of the switch you would like to use and how long the wires between the switch and limiter need to be.

The plug-and-play top speed adjuster with defeat switch connector for the Razor EcoSmart electric scooter is now made and it is our item # ESM-ADJUSTER.

Here is the link to the page it can be purchased on:

Thank you so much for the help. I was thinking of using the handlebar on/off switch item # SWT-2. The wires would have to reach from the bar to the back of the battery compartment, I can put connectors on the wires or if you want to let me know which connector I need to buy to make it work perfectly I will purchase that as well. Again thank you for everything! I cant wait to put it all together.

Our SWT-23 handlebar switch already has the right terminals on it to work with ESM-ADJUSTER so all that would need to be purchased with it is a CNX-W2.8FH-2T Connector Housing.

SWT-23 has a 65" long cable and if that is not long enough then we carry extension cables for it on our Extension Cables page.

said over 4 years ago
Hi I am looking to do this same exact thing except with a ON/ON switch(for the purpose of having a "turbo" overvolting effect while moving). I read in another post ESP support said to use a "break before make" switch. I cannot find a ON/ON that has three tabs in the back, I only see switches that have two tabs in the back. Can you please provide the above diagram except change the switch to a two tab ON/ON switch? If I plan on using the switch while the vehicle is operating are there any downfalls or negatives(for the electronics) using a ON/OFF/ON switch?

On/On switches are commonly available in SPDT and DPDT configurations which have three or six terminals. If you search for DPDT On/On switch they can be found with six terminals which can be wired as the diagram above shows.

said over 4 years ago
So if I have a SPDT switch with three terminals on the rear, is it as simple as the speed controller + to the middle terminal, then 36v to bottom terminal and 48v to top terminal?
J

said over 4 years ago
I'm trying to do this on a Honda minimoto kart and the factory switch is a single pole switch with only two terminals on the rear. I'm trying to keep factory appearance so can u show a diagram with a SP two or three terminal rear?

It can not be done with an SPST switch because two throws are needed to complete the circuit. It could be done with an SPDT three-terminal switch, so long as it has a high enough current rating, by following the wiring diagram for the DPDT switch and omitting the jumper wires between the left side and right side terminals.