A battery upgrade for Razor e300s with LiFePO4

started a topic over 5 years ago

Will I be able to make 14 miles on NC streets, one strech about a 1/2 mile or so with an uphill incline? not steep at all.

How will I wire them ? Please show me a drawing.

With an adult rider two 12V 7.5Ah batteries, whether lead-acid or LiFePO4, should provide around a range under the conditions you mentioned of around 6 or 7 miles (1/2 hour ride time at 12 to 14 miles per hour).

Our LiFePO4 batteries which are available on this page http://www.electricscooterparts.com/lifepo412v-24vbatteries.html are a direct replacement for the E300 scooter's original batteries.

Our LiFePO4 batteries would be wired exactly as the original lead acid batteries were, which varies depending on the Razor E300 version. We have wiring diagrams for each E300 version which shows how the batteries are wired at this link: http://www.electricscooterparts.com/razore300.html

said over 5 years ago
How can I tell what version it is ?

The version number is located on the ID tag which looks like this.

The ID tag may be found on the battery charger or scooter. Here is the ID tag locator for all Razor scooter, bike, and go kart models. 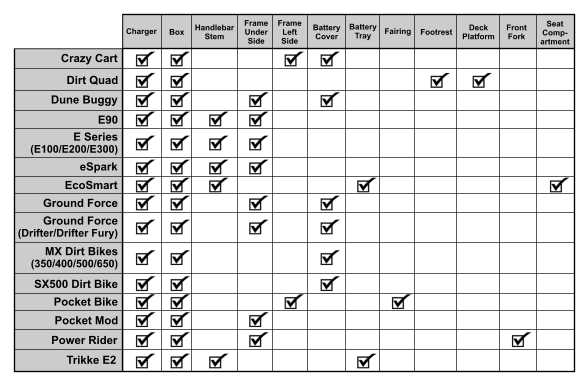 said over 3 years ago
Is it possible to purchase the 24v LifePo4 and install that into the e300 instead of 2 12v ones? I’ve been told that lithium batteries don’t easily charge linked up and it’s better to buy 1 of the correct size than two in tandem. Will it be easy to install if I were to grab the 24v, or is it even possible? Thanks.

The Razor E300 scooter has a 24 Volt 250 Watt motor (10 Amp), however, its motor will consume more than 250 Watts intermittently when going up hills or inclined driveways. For this reason, we recommend using a LiFePO4 battery that is rated for more Amps than the motor. For example, a 24 Volt 20Ah LiFePO4 battery could be used which has a 20 Amp (480 Watt) continuous output rating. LiFePO4 batteries have battery management system boards inside of them which will temporarily shut down the battery if their maximum continuous Amp rating is exceeded for more than a few seconds so if a 24 Volt 10Ah LiFePO4 battery which has a 10 Amp (240 Watt) continuous output rating was used on an E300 scooter then the battery might shut down anytime that the scooter goes up a hill or incline.

The easiest 24V 20Ah LiFePO4 battery to install may be the item # BAT-LIF24V20AH-A because its output and charge terminals are the same (two terminals). This means that the existing battery pack positive and negative wires could be connected to it and the existing charger port could be used to recharge it. BAT-LIF24V4AH-A requires a battery charger designed for LiFePO4 batteries so the original E300 battery charger is not compatible with it. Our LiFePO4 battery charger item # CHR-24V4AL292-3P is compatible with BAT-LIF24V20AH-A and has the same output plug on it as the original charger so it will be plug-and-play with the scooter.

We do not have a Razor E300 scooter in the warehouse so I can not determine if BAT-LIF24V20AH-A will fit inside of the E300's battery box so that is something that should be checked before purchasing the battery. The dimensions of BAT-LIF24V20AH-A are 8.8" x 4.7" x 6.9".

We carry another 24 Volt 20Ah LiFePO4 battery that is item # BAT-LIF24V20AH-P which is a smaller size at 9.3" x 3.2" x 5.8", however, this battery requires that the charger port is wired to a different connector on it than the controller. If it is a better fit in the E300 scooter then it could be just about as easy to install though because we could make a new charger port with a wire and connector on it that would plug right into the BAT-LIF24V20AH-P battery, and we could also make an adapter that would allow the existing E300 controller plug to plug directly into the BAT-LIF24V20AH-P battery.

Another option would be to install two 12 Volt 9Ah batteries in the scooter and to install two coaxial charger ports on the scooter to charge them. This setup would require two 14.6 Volt LiFePO4 battery chargers, however, they are not very expensive so going with this method would be the most cost-effective and save quite a bit of money over using a single 24 Volt battery. It would require some custom wiring though compared to using a single 24 Volt battery. We could make a dual 12V 9Ah battery and wiring harness kit with two charger ports that would make it plug-and-play other than needing to drill two holes to mountr the charger ports into.