i would like to increase the range on this scooter. i would like to add a seond battery pack of 9ah batteries. questions are, is it best to draw off of all six batteries while riding or should this be wired as to where i can draw off one pack until low and then with a switch or a plug begin to draw off the second pack? and if the second option is used, do i need to have a second charger for overnight charging? last question, if we opt for the second option, can you supply all the necessary parts? plugs, switch ,etc.

thanks in advance for the help.

If the second option is used then two battery charger will be needed to charge both battery packs at the same time, or one charger could be used to charge one battery pack at a time.

For the second option, we carry all of the parts needed such as the battery pack selector switch and second charger port if charging both battery packs at the same time is wanted.

Here is a wiring diagram showing how to wire the two battery packs to an SWT-154 battery pack selector switch and a CNX-W6.3MH-4T connector housing. 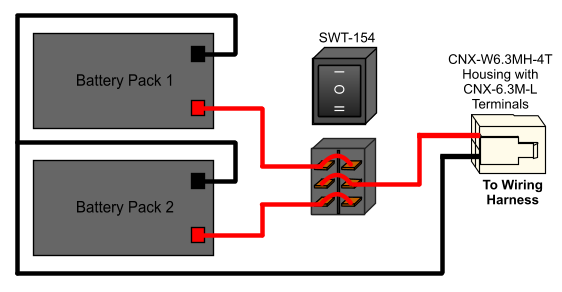