started a topic over 2 years ago

We are getting close to completing this project, but I have a question. 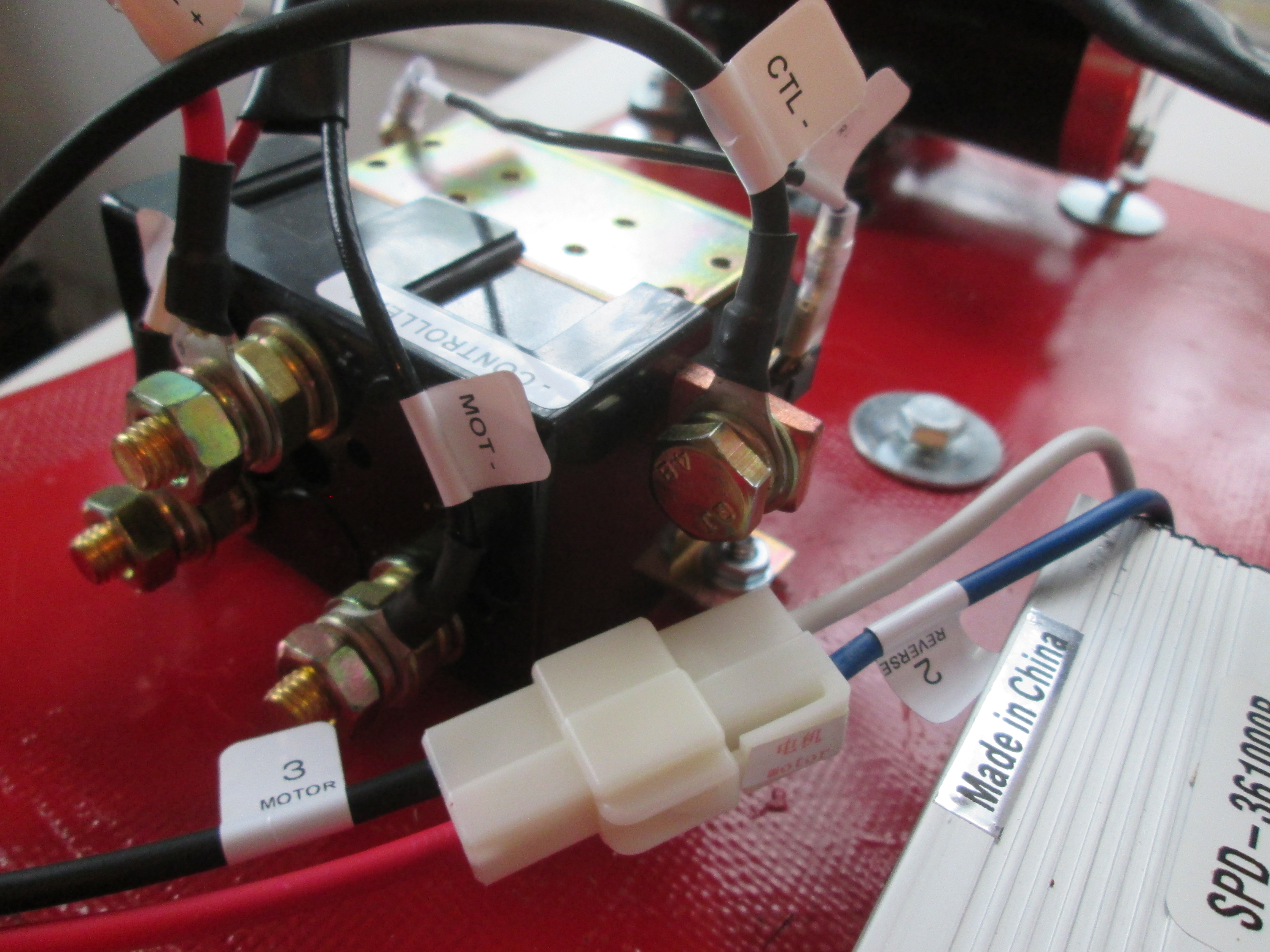 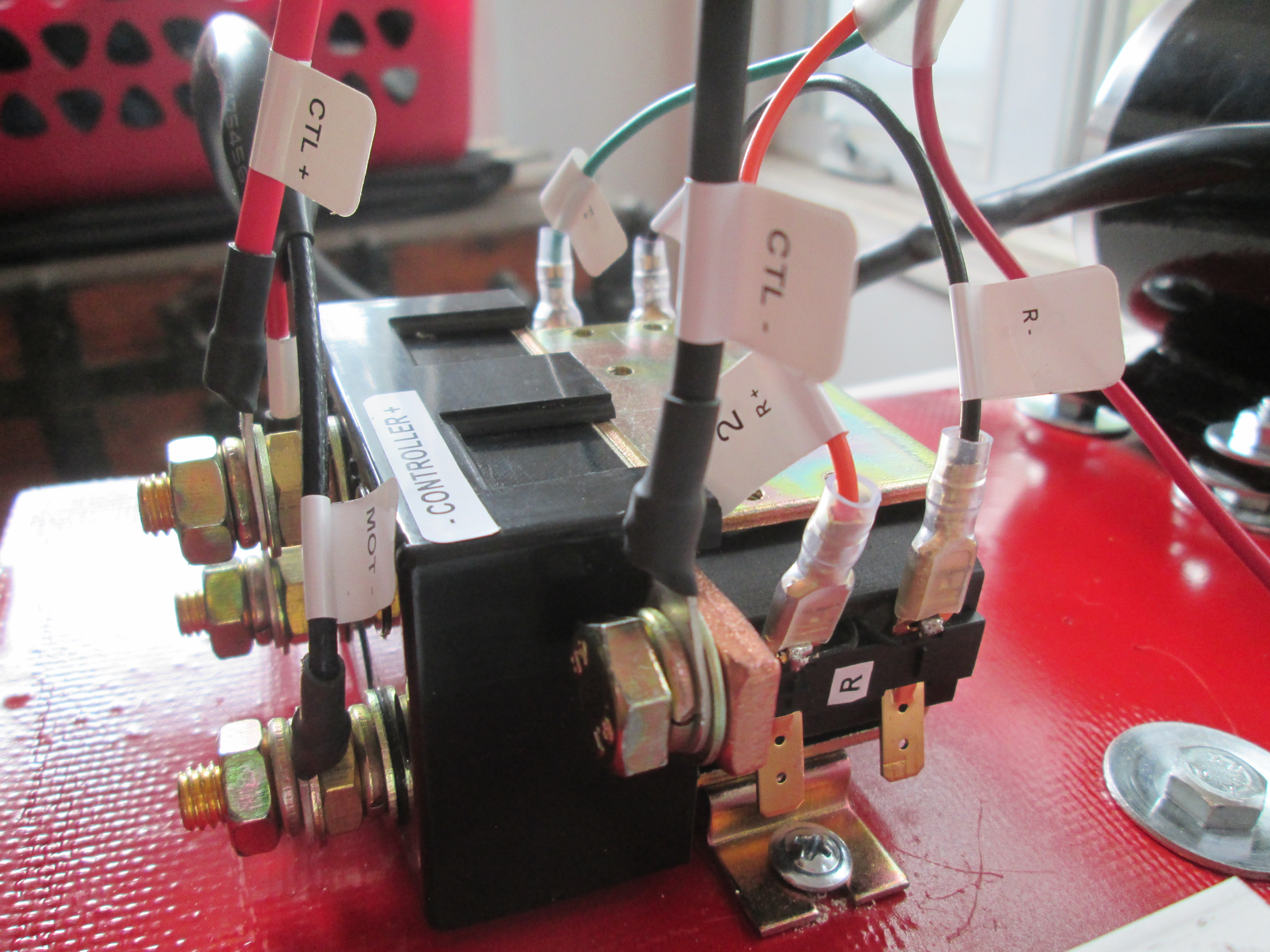 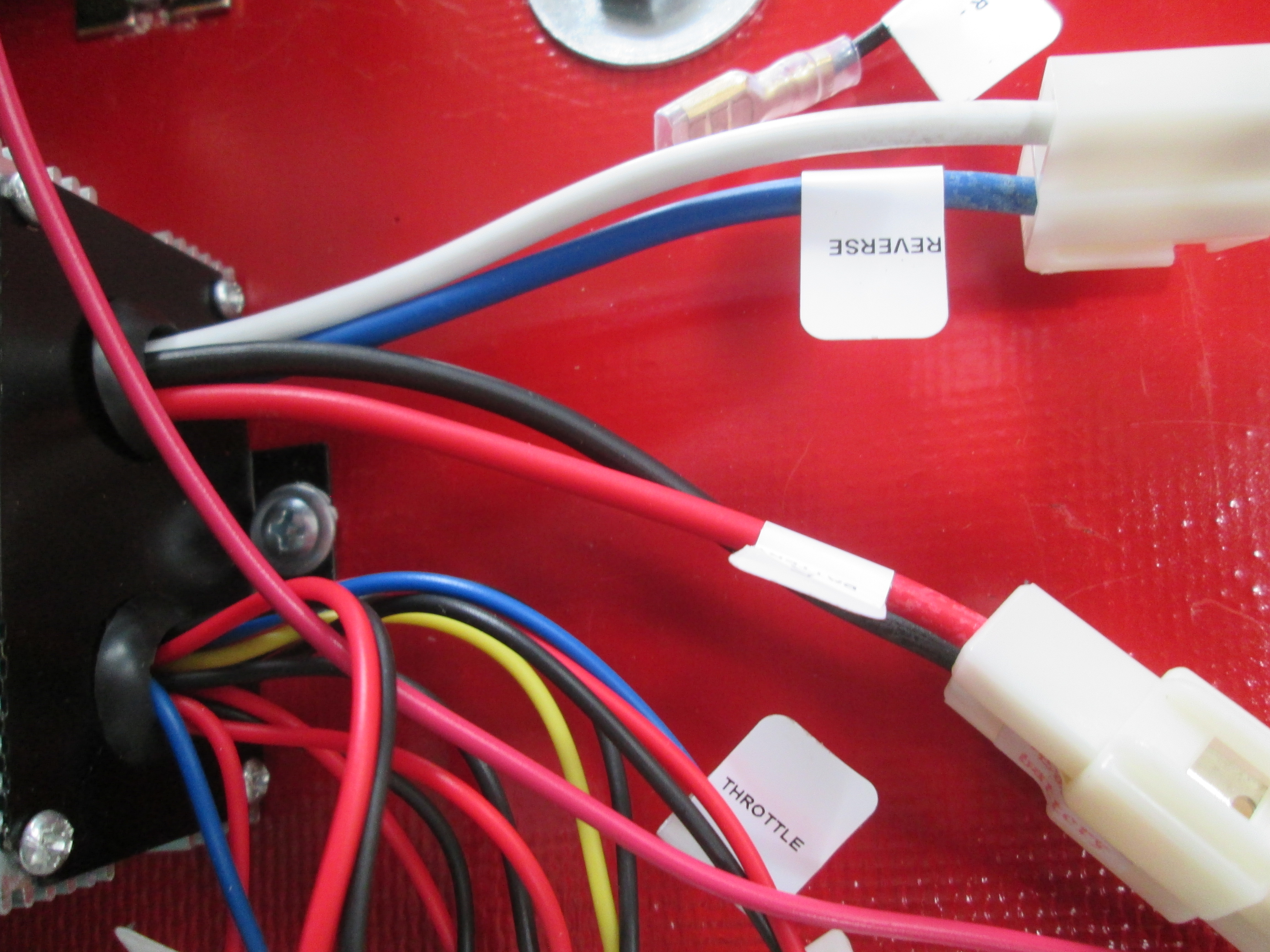 said over 2 years ago
Great to see that everything is installed and working.

Yes having the charger port wired into the bus bar is fine.

The noise that a battery charger makes also depends on its make and model. Some models hum a little while others are completely silent.

I'm ready to wire in my 36 volt golf cart charge meter, but it will be complicated to put it to the cold side of the on/off switch.  I have another place to put it and can give it it's own switch.  Can it get it's 36 volts from one of the unused connectors coming out of my controller?  I have one labeled 'brake lights' and one labeled 'indicator'.   Each has a black and a red wire.  Can I run the black wire to one side of the charge indicator and have the red one go through a switch to the other side?

said over 2 years ago
The charge meter should get its power from the controller's 'indicator' connector. This way it will automatically turn on and off with the vehicle.

However you might want to hold off on wiring the charge meter for now because the 36 volt indicator lights just arrived last week and this week we are going to attach wires and connectors to one of them and send it to you. So the charge meter will not need any additional wiring after it arrives.

Here is a wiring diagram that I drew for our technician to make the indicator light with wiring harness. Please have a look at the wire lengths and ring terminal ID and let me know if they are okay or need to be changed?

said over 2 years ago
That will be great.

Okay thanks for the wire length confirmation. I will have our tech start building this tomorrow and then we will go ahead and send it to you.

Everything is working great and the batteries hold enough charge for several days of use and I have more than enough speed and hill climbing torque.  I'm just finishing up on some graphics and then I'll post pix of the finished project.  I bought a multi meter and read up on how to use it, but the only place I get a reading is across the 36 volt battery pack. Fully charged it reads 39.1.   Why don't I get a reading across the terminals of the reverse relay?  I have the power switch on and forward/reverse switch in forward, but no reading across the terminals of the relay. 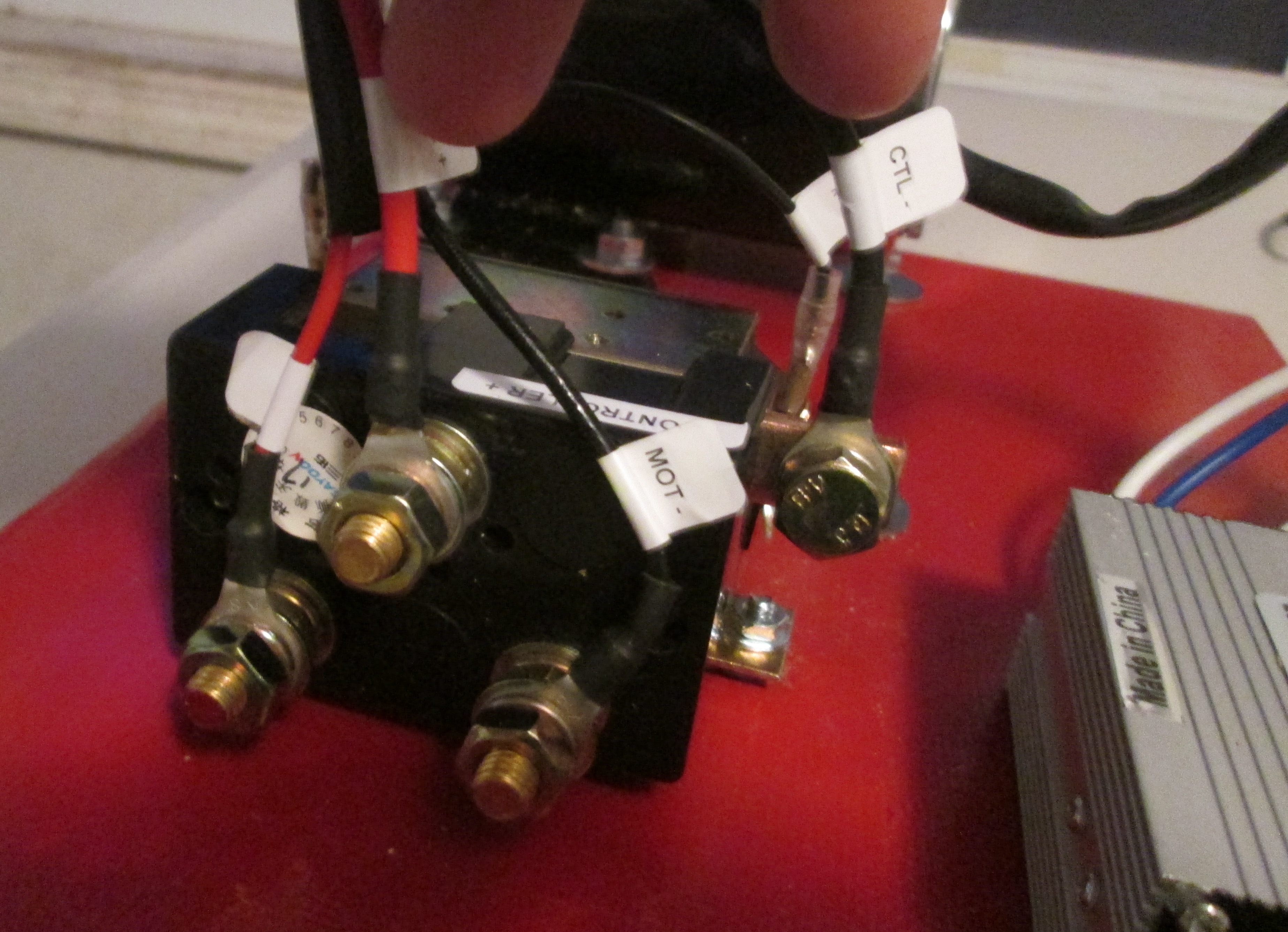 said over 2 years ago
When I read that the batteries hold enough charge for several days of use I got a little worried. Just want to make sure that you are recharging the batteries after every ride, even very short rides, so the batteries are not left in a partially discharged state when they are not being used. Keeping the batteries fully charged between uses will keep them in top shape for the longest possible battery life.

Great to hear that you got a multimeter. They have got to be the most useful and cost effective tool for electrical installations and troubleshooting. 39.1 Volts is a perfect fully charged Voltage for the 36 Volt battery pack. Immediately after the batteries have been recharged the Voltage may be even a little higher, but then after the batteries have been sitting for a little while it will go back down again.

I ran the car around my neighborhood for 45 minutes or so and then did put it on the charger.  It charged up in under an hour and that made me think that it had enough juice for a few days at a fair or circus.  My plan is to keep it charged up and it's easy enough to plug in the charger.

The multi meter read 38.1 volts on the relay spade connectors.  If I wasn't going to connect my new  indicator light and charge meter to the 'indicator' connector, would it also be OK to connect to the spade lugs on the forward side of the relay?  I plan to use the indicator connector coming out of the controller box, but I want to understand as much as I can about this set up.

said over 2 years ago
The spade terminals on the left and right sides of the reverse relay would not be a good place to connect a power indicator light or charge meter because they are only energized when the direction switch is in the forward or reverse position.

However they would be the perfect place to connect forward and reverse lights to. For instance forward and reverse indicator lights could be connected to them and installed in the dash. And/or a reverse light (the kind used to see behind the vehicle when backing up) could be connected to the reverse relay's spade terminals that are energized when the vehicle is in reverse.

I 'm guessing that the multi meter can serve as a charge level indicator for the 36 volt battery pack.  Fully charged, the meter reads 38.4 across the spade terminals on the relay.   It reads 39.1 across the batteries terminal posts.  Is that difference to be expected?

After running the car, what reading would indicate that it needs to be recharged?  If the reading falls below 36 volts, will the car still operate?

Is the analog golf cart charge meter providing the same information as the digital multi meter?

said over 2 years ago
A multimeter can definitely function as a charge level indicator however if it was used as one on a continuous basis the its battery would wear out a lot faster than normal.

The batteries need to be recharged when their Voltage level drops under 32 Volt while they are being used and under load. The controller has a built-in low Voltage protection circuit that turns off the motor when the battery pack Voltage drops under 32 Volts though, so you do not have to worry or think about over discharging the battery pack because the controller will not allow that to happen. Well before that battery pack reaches 32 Volts under load the vehicle will start to travel significantly slower than normal though so there will be ample warning before the controller shuts down the motor due to low battery Voltage.

I'd like to add a secret kill switch for security.  Would interrupting the positive wire on the forward side spade terminal of the relay be a good plan?

said over 2 years ago
Interrupting the positive wire on the reverse relay's forward side spade terminal would stop the car from moving forward however it could still be operated in reverse.

If the main (long) black wire that supplies ground to the both sides of the reverse relay's spade terminals was interrupted then the car could not operate in either forward or reverse until the secret kill switch was turned on. Although switches are usually placed in positive wires there is absolutely nothing wrong with placing a switch in a ground wire so that is always an option.