Razor Scooter 325 will not move with any weight.

started a topic over 8 years ago

I have a Razor 325 Scooter that will not move with any weight...like 60 pounds from my 7 year old. I tried to fix it a couple of years ago after getting new batteries. The repair shop replaced the Motor, Throttle and Control Box. The unit only worked for about 6 months and then kept going through batteries and now it has brand new batteries (for the 5th time) but still will not operate with any weight. Have verified battery connections and output.  When you lift up the unit it runs and the rear wheel spins freely. Throttle shows proper voltage and charge.  Can you please advise on what part or parts I should buy from you to fix this issue.....Thanks!!!

The first step I would take is to load test the batteries, even if they are new, because one or more of them could be defective.

If all three lights on the throttle stay on when the power is on and the throttle is fully engaged with the scooter on the floor then please let me know and I will provide the next troubleshooting step to take.

The green and yellow lights actually flash a bit with the red constant.  Interstate battery just put the batteries in and conducted several tests on the batteries both together and separately to make sure everything on the battery side was correct.

said over 8 years ago
Interstate battery is a good company so I trust that they properly tested the batteries and they are good. The problem must lie elsewhere then. 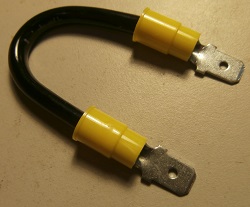 If bypassing the power switch and circuit breaker do not solve the problem, then the issue would have to be with the controller, throttle, or motor. Please let me know if the bypass tests do not help and I will let you know the next troubleshooting steps to take.

said over 8 years ago
The battery power going directly with two lines to the circuit breaker is correct according the Razor wiring diagram.
Here is a wiring diagram for the Razor E325 scooter with the place that the jumper wire goes drawn in orange. 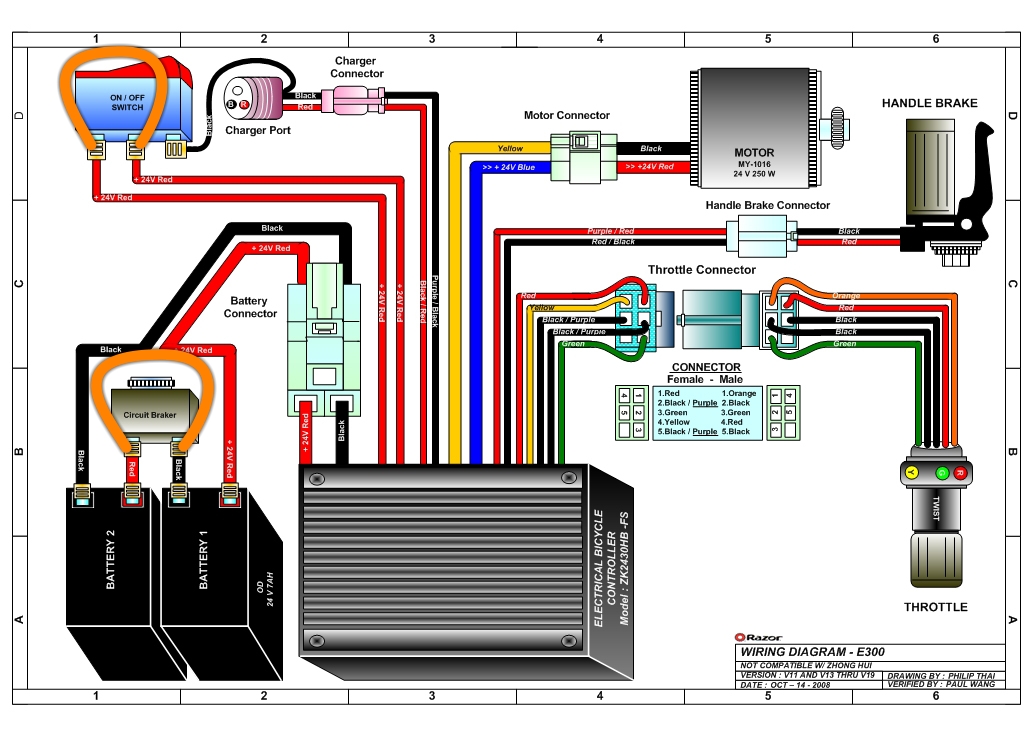 No Luck….jumper did not make any difference bypassing either switch. What do we do next?

said over 8 years ago
So far the battery pack, circuit breaker, and power switch have been tested and are known to be good. Since the motor runs with the wheel off the ground that indicates that the brake lever switch is good so I do not think that we need to test it.

The only components left to test are the throttle, controller, and motor. The controller can not be tested without having an electronics test bench or another identical scooter to temporarily install it into. However if the throttle and motor test good then the controller could be determined to be bad by the process of elimination.

Testing the throttle and controller require advanced testing methods compared to the other tests we have done so far.

Throttle: To test the throttle a 5 Volt DC power source is needed. It could be a 5 Volt DC wall mount power supply, like the kind used for answering machines and calculators, or it could be three 1.5 Volt batteries wired in series to produce 4.5 Volts. (4.5 Volts DC is enough power to test a throttle.) However do not exceed 5 Volts DC of power to the throttle or it will damage it. Also do not apply reverse polarity to the throttle because that will also damage it.

Different versions of Razor E325 scooters were made with different throttles. Please let me know how many wires your throttle has and I will let you know which wire is the +5V input, ground, and output wire. 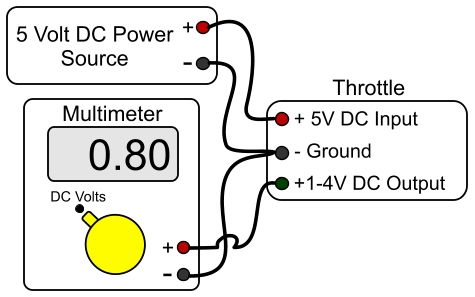 Motor: To test the motor under load the motor and battery pack need to be disconnected from the controller and a testing wire harness with a heavy duty switch needs to be made. The harness should be made so the switch can be taped to the handlebars so it can be turned on and off when riding the scooter. The testing wire harness will eliminate all components other than the battery pack and motor so the motor can be sure to receive full power from the battery pack. When using the testing harness the scooter should be pushed to walking speed before the switch is engaged to prevent over powering the drivetrain and damaging the motor shaft. 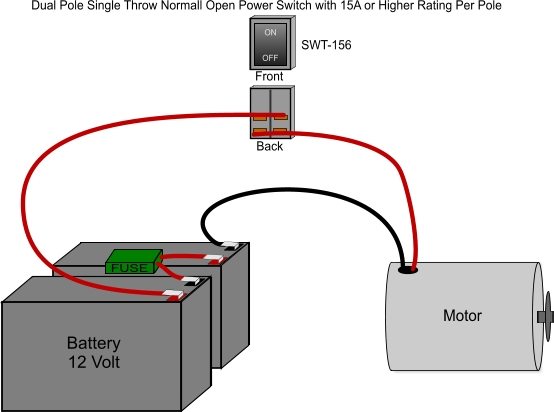 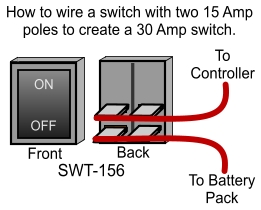 What is the best method for connecting the test wires to both the throttle and motor so that the wires to each device do not require cutting?

In my last reply I described how to test the throttle and motor to show exactly what is involved in testing these parts. For someone who only has one scooter to repair, taking the time and obtaining the tools and materials to perform these tests may not be worth it compared to buying new parts and installing them to see if that helps.

Throttle has 5 wires...what are the 3 wires that are connected for the test?

I get the instructions above.  I was just inquiring if I did not have to cut the motor wires to test....figured it out myself ...all is required is the use of standard wire connectors at the end of the plastic connector...they fit fine.

My model is a 31.  it appears in your parts area the throttle does not have the power indicators.  My unit was replaced at the shop with the 5 wire with power indicator would this be an issue?

said over 8 years ago
Here are the three throttle wires used for testing: 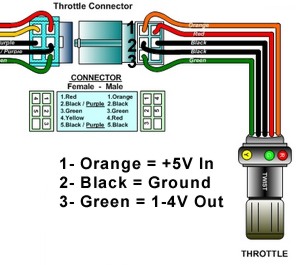 That is a great idea to use .250" female quick connect terminals for testing the motor so you do not need to cut the wires. We have so many CNX-50 connectors laying around here that I never thought beyond using one of them for the test.

I had a customer a few months back have the exact same problem with their Razor scooter with the motor not producing enough power. He replaced the batteries and throttle without any luck. He said the problem started immediately after the scooter had been knocked over and landed on its motor. I never heard back from him so I do not know if he pursued the problem and got it fixed though. If you figure out what the problem is please let me know so I will have a better idea what to recommend to others.

We are making progress!!  The motor tested fine.  Based on your throttle comment above I am thinking the throttle could be an issue.  The unit only ran when I picked it up from the shop and then had the same issue with no power once I got it home.  They stated it needed new batteries....obviously not the case.  The controller (they installed) is model ZK2430hp-fs.  Is this compatible with the newer style throttle they also installed?  What do you recommend?  should I go back to the original throttle type and speed controller?  any benefit to one or the other?

Since the motor and batteries are good that only leaves the throttle and controller to be the problem. Typically throttles either work or they don't, as they have a single hermetically sealed IC chip inside of them that controls the output signal. I still recommend testing the throttle to pinpoint the problem though. That way you can be certain that the next part you buy is the one which is defective and needs to be replaced.

I have not been able to test the throttle but want to get the scooter fixed ASAP.  Based on one of your previous comments about trying a part or two that could be the issue (keep it easy) and since we have pretty much narrowed it down to only two.  I would like to order a controller...since it is the easiest to install and to verify if the correct match was used by the previous shop.  Can you please provide me the correct updated controller and throttle order info.  I definitely want to use or replace the throttle with the newer (5 wire) adjustable throttle and thus controller.