started a topic about 8 years ago

I have a Freedom 946 C scooter that has been in storage for maybe 5-7 years.  Purchased new batteries and started to charge and the red light came on briefly for maybe 30 seconds and turned green.  I figured the batteries came charged, the kids rode it for about 15 minutes til the batteries ran out of power.  Everything worked fine lights signals etc.  Plugged in to charge and the green light illuminates and will not charge the batteries.  The red light will not come on.  I'm sure the batteries are wired correctly in series as all I did was put the new batteries in.  I can buy a new AC adapter but don't believe that is the problem.  Any idea what could be wrong or how could I troubleshoot?  Surely the new batteries are not defective.  Also is there an external charger that can be used to charge these batteries individually if necessary?

said about 8 years ago
That is perfectly normal for new electric scooter batteries to only take around 30 seconds to recharge before they are used for the first time. Since the charger light turned red and then green that is a very good indication that the charger is working properly. 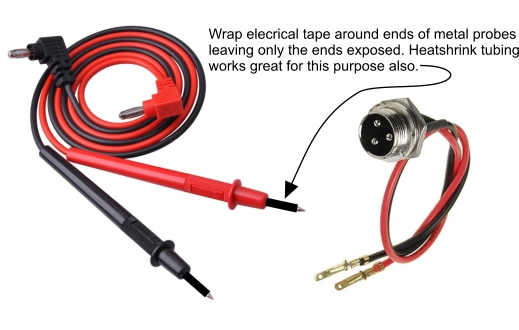 If the scooter has a 24 Volt battery pack then you should get a little over 24 Volts at the charger port and around 29 Volts at the battery charger plug. Performing these tests should help pinpoint the problem. Please do not hesitate to let me know if you have any further questions after performing the tests.

I finally got a multimeter and was able to check the two items you mentioned above.  I do get about 29 volts from the battery charger plug.  Not positive i'm doing it right but with the batteries connected I don't seem to be getting any voltage at the scooter charger port at all.  The batteries are pretty dead I have checked it with the key off and key on the same reading no voltage.  Just to check I checked the batteries and are getting a little higher than 12 volts on each battery and both wired on series about 25 volts.  I guess I will check the wires for bad connections or broken but it seems connected the the charger port and to the controller.  Is there a way to check the charger port itself?  Also could the controller be the cause of it not charging?

Thanks for all your help

said about 8 years ago
That has to be the problem, if you do not have Voltage present at the charger port then the battery charger is not connecting to the batteries and can not charge them.

On the other hand if you find Voltage present at the controller's charger port connector, then that indicates a problem with the charger port, and it needs to be repaired or replaced.

Please let me know if I missed a question or if you have any further questions.

This may be the easy way to charge the batteries directly if this is safe.

Thanks again for all the help

Yes, you can bypass the controller and wire the charger port directly to the battery pack. That is how Currie Tech has been wiring their electric scooters and bikes for the last 15 years so it is a time proven way to do it. That way the controller is eliminated from the charging system so there is one less thing that can go wrong with it.

Something must not be correct. Any help would be appreciated.

I have disconnected it for now.  I tried plugging the normal wires back on the batteries to try the scooter.  It seems to be dead no power. I did cut the 16 gauge wires off coming from the controller as these are not connected to anything as they originally went to a connector to then 14 gauge wires and then to the scooter charger port. One thing I did notice and didn't like is when I plugged the charger port wires on the battery it sparked alittle when plugging the last wire on the battery.  Worried its trying to short out so disconnected it.  Anything I could test to see what is wrong?  I would think how I wired from the charger port to the batteries is correct but who knows.

From the above post I used a multimeter and checked the battery voltage from how I had it wired.  It was around 25 volts tested at the wires leaving the batteries so it looks like it was wired correctly in series.  I then went to check the voltage at the scooter charger port male prongs and at first touching the a prong where the red wire connected and the prong where the black wire connected and if seemed the multimeter indicator wanted to go backwards below 0 not forward as it should to go to 25 volts.  Thought that was odd.

Then I probed the red wire prong and the prong with no wire connected and got a big flash I must have touched something and it shorted out even damaging one the the multimeter prongs as I didn't take your advice above about taping them.  I may have ruined the charger port or maybe it was already been defective but now most likely bad since I shorted it.  Really don't understand if I had 25 volts coming from the wires and originally wasn't getting a reading at the prongs.  Any ideas what to do next?

I may have fried the controller totally I wired the 16 gauge wires back to original just to see if it would show any power. Turned key on and nothing The batteries are holding over 25 Volts should show something.  Not really sure what to do now, was hoping to get some use from it.  Everything worked when I put the new batteries in drove it til it died of no power.  The batteries ran out of power and never could charge them.  A new controller maybe but don't like the idea of trying to wire a universal one.  I definitely ruined the charger port it melted off part of a prong when I shorted it.  Any ideas would be helpful.

I guess I rambled on a little in the above posts but was hoping to get some answers but I'm kind of committed to get this so please try to answer the questions below.  It is appreciated.

I think I will replace the controller as I have no power.  Please give me the part number of the one to purchase from you?

Also I need a charger port part number?  Maybe they are generic all fit all its a 3 prong.

The fuse seems ok not positive any idea why I have no power at all now?

said almost 8 years ago
Sorry for the late reply we have been very busy this week. It sounds like you wired the charger port correctly to the batter pack. If you want to attach a picture I could confirm. If the batteries were only briefly used then a 15 minute recharge time is perfectly normal. A 6-8 hour charge would be for a battery pack that was completely exhausted after being used for 30-60 minutes of ride time.

It is normal for there to be a spark when connecting a controller to a battery pack, they all do that.

When testing Voltage at the charger port. If the multimeter shows a minus Voltage reading the meter probes may be touching the wrong pins, if you reverse the pins the probes are touching the meter will indicate a plus Voltage reading. Sorry to hear about the short circuit that occurred when testing the charger port. These kind of things happen to the best of us sometimes. Charger ports are not too expensive ans usually easy to replace.

After the new batteries were installed and the scooter was running, how long did it run for, and did it slow down before it stopped running, or did it just quit running all at once without slowing down?

After installing the new batteries the scooter ran for about 10-15 minutes.  It slowed down before it stopped running completely.  As for charging the scooter with the batteries wired directly to the charger port as I stated the charger adapter light stayed red for maybe 15 minutes then flashed to green and back to red about every second or two that's when I felt something was wrong does that mean they were recharged?  I thought it would go back to a solid green light either-way I still had no power.  Is this correct to have 29 volts going to the batteries from the charger directly with 24 volts from the batteries? When I connected the batteries back up to the scooter and turned the key on it had no power the red indicator light came on briefly for a second then went out like it was dead.  Now the red indicator light will not come on at all that's concerning as I wondered about the fuse blowing but when I shorted it out with the multimeter but the only thing connected was the batteries to the charger port.I appreciate your help any ideas what I should do next?

I really don't have a problem purchasing a new controller and charger port at this point just hope that finally fixes the problem because everything worked when I first put the batteries in I just couldn't recharge them.  Could you let me know which controller part number to purchase from this site.

Usually if the scooter slows down before it stops running it is because the batteries ran out of power. When the controller goes bad the scooter stops running all of a sudden, usually without slowing down, unless the battery pack's charge is wearing down at the same time.

Before installing a new controller I recommend load testing the battery pack to make sure it is not the problem. I know they are new batteries but even new parts can be defective sometimes. Before load testing them you will need someway to recharge them though because they will need to be recharged very soon after putting a load on them so they do not become damaged from leaving them in an uncharged state for an extended period of time. I would start by load testing them on the scooter by reading their Voltage with the scooter power off, and then reading them again with the scooter power on and throttle fully engaged - the packs Voltage should not drop more than 1-2 Volts and should not drop under 23 Volts with the scooter on and throttle engaged.

Unfortunately Freedom Scooters is no longer in business so original plug and play controllers are not available anymore. A universal controller would have to be custom installed to get the scooter working if the controller is bad. For this job I recommend our SPD-24500B speed controller which is available on our 24 Volt Speed Controllers page.