started a topic about 7 years ago

Was bought from ebay a used adult electric trike and it has no brand name or identifying decals anywhere on it.  Came with A long cycle life  37v 10ah lithium battery XH370-10J. 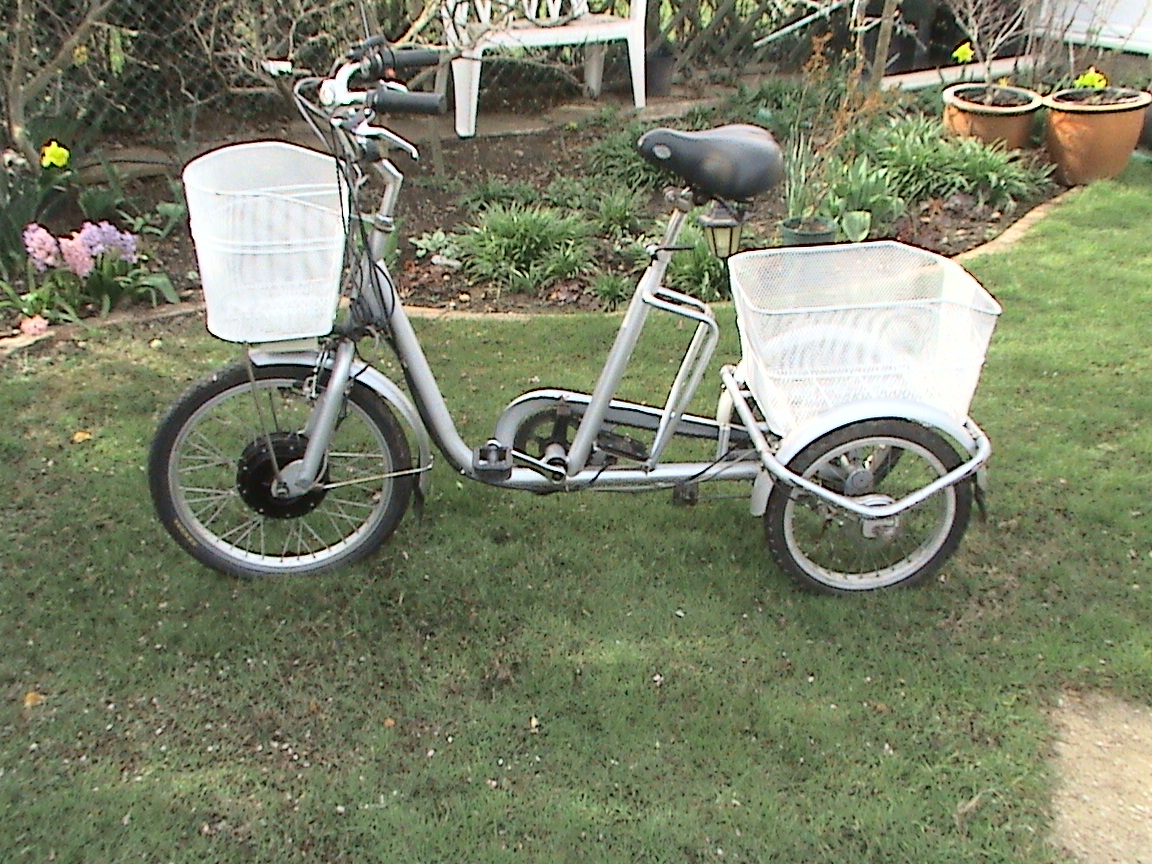 I am leaning towards it being an unbranded Chinese-made electric tricycle because of the lack of branding or stickers on the bike and also because I have never seen one like it made by a major brand such as Currie Tech or Razor. The battery gauge that reads Displayer does not indicate which brand it is because Displayer is only the brand of the battery gauge.

I see that it has a front hub motor and that a battery pack was originally mounted under the seat and behind the seat tube.

If you plan on getting it working again then you could install standard off the shelf electric scooter/bike parts. It looks like there is plenty of room in the rear basket to put a battery pack and speed controller.

The first step I would take is to see if the hub motor has two thick wires, or three thick wires and several thin wires coming out of it. If it has two thick wires then it is a brushed motor which can be tested by connecting the wires to a 12 Volt battery to see if it works. If the hub motor has three thick wires and several thin wires then it is a brushless motor and it can not be tested without having a brushless motor controller and battery pack. There is also the issue of how many Volts the hub motor runs on. Its Voltage may or may not be marked on the hub motor. If you have the old battery pack or charger then their Voltage can be determined by their labels or by counting how many batteries are in the pack.

said about 7 years ago
I just went back to the original posting and read that it has a 37 Volt 10 Ah lithium battery pack, so the Voltage of the motor is 36 Volts.

Hi ,thank you for this. The bike has some problem which we are trying to solve ,

Week ago i took the trike in batribike shop . They have done test on battery - said it was fine. They wouldn't  touch trike because  "unknown model"

Voltmeter reading  out of battery terminals is 41 ,7 v . On start- all the lights come on (except 1st one) think it`s just broken led.
when I twist the throttle the lights stay on ,bike moves forward but only for a few feet then the motor cuts out, sometimes the motor will kick in again, again for only short distance.
When I pedal without using the twist grip the lights remain on.
on all occasions when the battery is switched on, the indicators show fully charged (all lights on).
When I pedal the trike the battery does NOT cut in unless the throttle is used.  Any ideas what might be the problem ?

The problem that you are describing is usually caused by a bad battery pack that is dropping too much Voltage under load, but I understand that you had the battery pack professionally tested and that the Volt meter on the handlebars does not go down when the motor is operating, so I think that we can rule out the problem being the battery pack.

It also does not sound like a loose connection or bad wire because the problem consistently happens when accelerating from a standstill.

The next place that I would look would be at the speed controller or motor. If the motor is brushed and has two thick wires then it can be tested by connecting it directly to a battery, however if the motor is brushless and has three thick wires and several thin wires then it can not be tested without having a speed controller that you know is good.

If the motor is brushed and tests good then that points towards the speed controller being the problem.

If the motor is brushless and can not be tested then installing a new speed controller will be the only way to test it. Speed controllers tend to have more problems than motors do, so you may want to consider replacing the speed controller to see if that solves the problem.