I recently picked up a used Currie E Zip 1000.  It is 36 volt with the Direct Drive Motor.  The seller advised the Batteries were a year old but still held full charge.  I checked them with Multi Meter and each Batt measured 12.5 volts.  I Checked the Master connection and it measured 39.1 volts.  Turning on the power switch and operating at full throttle resulted in very slow to moderate RPM of the rear wheel.  I suspected a bad Hall-sensor in the throttle and tried running the motor directly from the Battery Pak.  The results were essentially the same Moderate RPM without the lag in spooling.

I took the entire assembly apart and cleaned and lubricated all parts looking for mechanical parasitic drag form a bad bearing, or dragging disc brake pad.  I have not re-assembled because I decided to install a new tire before re-installing in the frame.    In the meantime- I am looking for suggestions-  possibly buying three new 12 V 12 AHM batteries.    Does anyone recommend a particular brand?   They are all made in China using the same materials, etc.  Why are some being sold for 24 bucks and other brands 35?  Typically,  the more expensive ones boast a 1 yr guarantee but after paying the extra ten bucks for each battery-  you could easily buy a 4th or 5th battery for the same amount.   There are so many factors that impact SLA battery life to begin with.  How does one differentiate a good  battery from a "so-so" battery.    The batts currently in the scoot are label Mighty Max.   I have seen them advertised for 20 bucks each.

said over 3 years ago
A full charge on 12 Volt scooter batteries is 13.8 Volts per battery. So a 36 Volt battery pack should be at 41.4 Volts when fully charged. You might want to test the output of the battery charger to make sure it is at 42 Volts so it can fully recharge the battery pack.

We have a battery pack load testing guide on this page: https://electricscooterparts.com/loadtest

A good used 36 volt battery pack will only drop around 1-2 Volts under load and will not drop under 36 Volts while under load.

Following up on my battery load condition.  I have ordered a new set of SLA Batts for the E Zip.  According to your web page battery calcuator  running a 1000 watt motor on flat ground using a 36 volt battery pak with 10 amphr. rated batts,  I can expect to operate the scoot for 25 minutes.

I was hoping to increase the performance by over-volting the 1000 watt motor by running it on 48 volts.  There is a YouTube video that depicts someone doing this with the Schwinn Stealth 1000. He claims to have used the OEM controller and throttle (?)    I would like to do the same but I do not want to burn up the 36 volt controller especially since they are 59.00 to replace.  I have also read that most of the later model Currie Controllers lock out voltages above the rated specs and will not function.  I have seen Universal 24, 36, 48 , 60 volt controllers advertised along with 3 pin hall-effect throttles.  Would this be a more advisable approach ?   I am only hoping to achieve a modest increase in speed to 20-22 MPH.   The Currie E zip has an advertised top speed of 17 -19 Mph.

In my experience,   I also had a Schwinn Missile FS that ran on 24 volts -400 watts and it seemed to have much better performance even with a 200 Lb rider.

said over 3 years ago
Back when Currie made electric scooters they limited the top speed of them to 15 MPH for product liability insurance reasons. So the top speed of an unmodified eZip 1000 scooter should be limited to 15 MPH. It will of course go faster than that when traveling downhill though.

I am aware that some later version Currie controllers did have an overvoltage shutdown feature and could not be overvolted.

Overvolting an electric scooter or bike motor creates a circumstance where the motor produces more heat than it is designed to dissipate. Some motors with large cases that have vent holes can handle being overvolted, however Currie motors have relatively small and unventilated cases so they tend to not hold up very well when overvolted. Increased Voltage and Current do not burn out electric motors, excessive heat does. So an overvolted electric motor often fares well if used for short rides such as a one block race, however the same overvolted motor could potentially overheat and burn out if taken for a longer ride. A 36 Volt 1000 Watt motor can consume up to 1800 Watts when running at 48 Volts and a certain percent of the power that the motor consumes turns into heat.

I can not recommend overvolting the motor unless you are prepared for it to burn out and need to be replaced. Most electric scooter motors rated at 1000 Watts have enough power to propel a scooter to 20 MPH so instead of overvolting the motor you might want to consider changing the gear ratio by installing a larger motor sprocket or smaller wheel sprocket.

We have a Gear Ratio Calculator which will help with selecting the right sprocket sizes for a desired top speed.

I have had the same experience with electric scooter motors. I have two identical unmodified 24 Volt 500 Watt Urban Express electric scooters with different brand motors factory installed in them, and one of these scooters will climb steep hills with ease while the other one will stop at the base of a steep hill and refuse go up it. So the real world performance of electric scooter motors tends to be a much better indicator of their actual performance level than the Watts rating sticker that is applied to them.

I still have yet to check the performance of the scooter using a fresh 36 volt battery pak.  The specifications for the oddball 36 volt 6 pin controller do not indicate any over-voltage protection that is indicated in their other controllers ( Post 2010 )    That said,  I do not want to burn out a 60 dollar controller and a 150 dollar   1000 watt XD motor in the name of science.   Re- Gearing is not an option as the scooter is running the Currie Direct drive motor that has the motor attached to a jackshaft housing.  On the other hand-  I have read about the issues of overvolting a chain drive scooter and their tendency to either dislodge the chain, or break it  when the throttle is applied after coasting.   It seems to me that this is the reason for the popularity of the MY 1020 electric motors.  These seem to offer much more flexibility at a lower cost than the XD motors.  The MY1020 motors are rated at 3000 RPM.  The Motor housings have  better ventilation to dissipate heat and can even be fitted with small dc fans for enhanced cooling.  The best attribute is that they are also brushless and produce more Nm of force for a given wattage over brush motors.

i have one that s making a grinding sound i havv';t been able to find replacemtezip 1000 rear end replacent

I took my housing completely apart looking for a possible source of parasitic Drag,  a bent shaft, a bad bearing or chipped teeth on the gears.  These rear drive units are supposed to be capable of generating almost 70 Newton Meters of force and since the rear wheel assembly is gear driven they have lots of low end torque.

If you have one that is making "grinding" noises, I would check the two Outboard bearing hubs first as they carry most of the load and torsional force.  From there, I would also check to see if your rotor is hanging up on the disc brake.  Beyond that,  you may have a bad internal bearing in the jackshaft housing, or a bad spur gear on the motor.   I have seen the entire assembly including new rear tire and tube for $289.00 but they claim it has also been discontinued By Currie.

thanks for the quick  i will response ill check that out

We just got a shipment of eZip and IZIP 1000 series electric scooter motors with gearbox and axle that are now available to purchase. They are our item number MOT-CTE361000DD and are sold on these pages:

We have found a source for and expect for the eZip and IZIP 1000 series rear rims to be available later in this year. 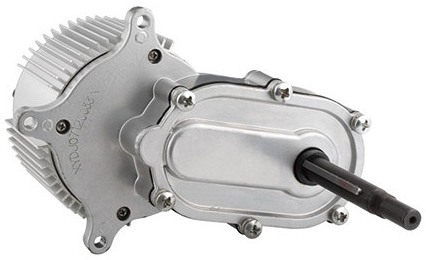