This forum is in read-only mode. Please continue to browse, but replies are disabled for now. Why?
Discussions Question and Answer Forums Electric Scooter, Bike, and Go Kart Repair Forum
Answered

started a topic over 5 years ago
I had bought a crazy cart half year ago. Few months ago, my cart stopped working so I had a check. Then I discovered that the plastic layer of the wire of the motor was melted and not in good condition so I replaced the whole motor. However when I turned on the cart after replacing the motor, the cart ran by itself without pressing the accelerate pedal. So I tested the cart again and found out that it should be something had bypassed inside the accelerate pedal. Therefore I replaced it. But after that, the cart cannot run any more, even I put the old accelerate pedal back or replace a new controller, the cart is still not working. Now it must not be the problem of the motor and the battery because I tested them by connecting them together directly, and the motor ran. Is there a way to test the controller and the accelerate pedal? If a multimeter is needed, I will get one. Also, will it be the problem of the charging port? Thanks, Jason
Best Answer

ESP Support said over 5 years ago

The controller can not be tested without having a test bench full of equipment specifically chosen for testing controllers. The best way to test a controller in the field is by testing all of the other parts that connect to it and using the process of elimination to determine if it is good or bad.

The throttle can be tested using the method below. 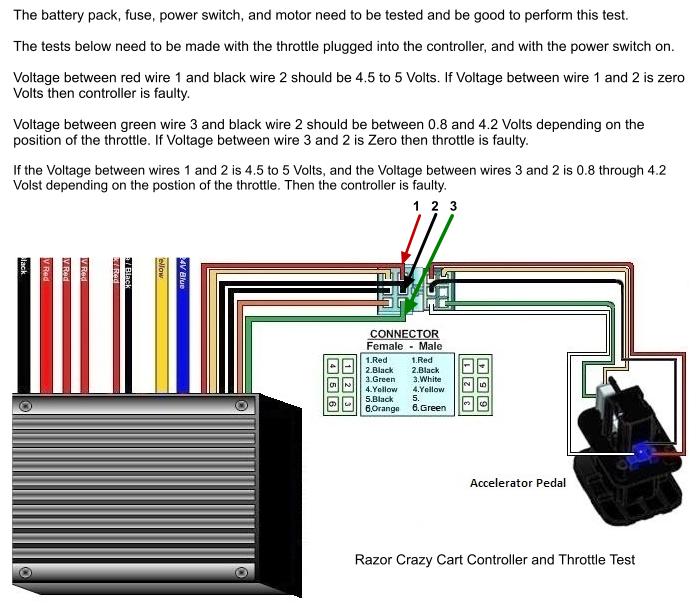 said over 5 years ago
Thanks a lot! Gonna test it after getting a multimeter. Maybe few days later.
J

said over 5 years ago
After buying a multimeter, I checked the battery first and it's fine as the Voltage is above 23V. Next I went to check the switch and I discovered that I had plugged the red and black wires incorrectly (the switch is fine). However(unfortunately) even if I had plugged the wires to the switch correctly, the cart still wouldn't have worked because when I was checking the throttle, there was no continuity even it was in full throttle. Probably need to fix it.
J

said over 5 years ago
So I tried to fix the problem, and I found out that actually I had mixed up with those wires so it had no continuity. However when I plugged it into the controller, switched it on and pressed the throttle, there was no voltage coming out to the motor, but for the old throttle, there was when it was pressed. That means that actually the old throttle doesn't have problem but the new one. It was actually the old controller's problem (I tested it by switching the new controller to the old one, and there was no voltage coming out even full throttle with the old throttle). But another problem came out is that when I press into full throttle, the controller clicks and the voltage decreases near to zero. Then I release and press again, voltage rises until full throttle, controller clicks and decreases again (the highest voltage I got is 23.7V, if above, back to nearly zero ). Is that a big problem or it can be ignored? Please let me know.

said over 5 years ago
Answer

said over 5 years ago
Okay but actually what 23.7V means is that the highest Voltage I can get on the blue and yellow wire (controller output) by pressing the throttle. The battery is still running at its own Voltage (28.1V) to the controller. Where the Voltage dropped nearly zero when full throttle was actually on the blue and yellow wire, not the battery. However as you had mentioned before, I should not test the Voltage of the blue and yellow wire (controller output) because it is not pure DC power. I'm supposed to directly connect it to the motor to see if it runs but I forgot to tell you that I just broke the wire of the motor accidentally. So now is still the click of the controller okay?

said over 5 years ago
Thanks for explaining that I was a little confused about which wires the Voltage was tested from before. The controller is supposed to click when the throttle is pressed so that is okay. Hopefully when the broken motor wire is fixed everything will work normally then.

said over 5 years ago
I just soldered the wires and the cart finally runs! Thank you for helping me!
Login or Signup to post a comment
More topics in Electric Scooter, Bike, and Go Kart Repair Forum
See all 619 topics