started a topic over 5 years ago
I have a 24v 350w yk31c controller I can't seem to get right on my e rivet mini bike. The wiring wasn't hooked up when I got it so I'm at a loss already plus a newbie to this. I hooked the charger port straight to battery and the battery is charged. I thought that with throttle ,battery and motor plugged in it would run.....wrong. can I bypass or not hook up on off toggle switch? Anyways... I need help a diagram something it's driving me crazy. Thanks in advance

said over 5 years ago
The wiring directions on the controller are correct. The only connectors that need to be used for the controller to operate are the:

The electric lock connector wires need to be connected to a power switch and the switch contacts closed for the controller to operate. The electric lock wires could be bridged together for testing purposes.

If all of these connectors are used and the bike still does not run then there are troubleshooting procedures to figure out what the problem is. Here are links to some of these procedures.

said over 5 years ago
Yes bridging the wires together means to connect them together so electricity can flow between them.
T

said over 5 years ago
Success at last! I was so close but it was the bridging of power lock that did the trick. You guys are great and my little girl is going to be excited..once again thank you this is the best forum you guys rock!

said over 5 years ago
Great to hear that you got the bike running.

said over 5 years ago
Well glad you said that so I did hook up a switch for power lock. I got it running only to find out the battery wouldn't pass the volt drop test so I need to replace the battery which is the 2nd to last thing I didn't replace on it which is the motor. I swear I hope that the motor is still strong I know it works but hope it won't crap out on me too. One last question on power port wiring it's a 3 prong and if you were looking at it with the nub on inside down is it power on rt and other two neg? I also have it wired directly to battery and from battery to controller. It must be ok because it's working but the charger light is always on green not red like before.

said over 5 years ago
From your description, it sounds like the charger port terminal polarities are correct. Just to verify though here is the standard polarity of most 3P inline charger ports. 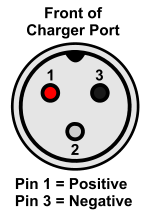 Some vehicles will have negative going to terminal 2 and 3.

If the charger's indicator light is not turning red then the charger port could be tested for Voltage to make sure that it is making a connection with the battery pack.