Razor Go Kart Drift V.1 suddenly stopped running. Batteries and Wiring Harness were both replaced a few months prior. Would not even Show it was charging at power switch and no LEDs at throttle. After a month or so wiggled around the plugs at base of charge port while connected to Wall Supply. Switch lit up red and it took a whole 2 days for Power indicator on throttle to Turn Green from Yellow. Go kart only runs for 15-16min after a full charge. So I believe it is not getting a sufficient charge. Re Connected all wiring clamp down on fasteners. Noticed on 3 pin charge port there are only 2 wires connected to (+ -) pins and one is not connected to any wire. Is that Normal? There is 2 black wires connected to negative pin that split off to be connected to powrer switch. Does the Controller regulate charge of batteries as well?

Only two out of the three charger port terminals are used and have wires connected to them. The negative terminal has two wires attached to it. I attached a wiring diagram of the Razor ground Force Drifter version 1 through 2.

The controller does not regulate the charge at all and the charger port wires are connected directly to the battery pack wires inside of the controller. 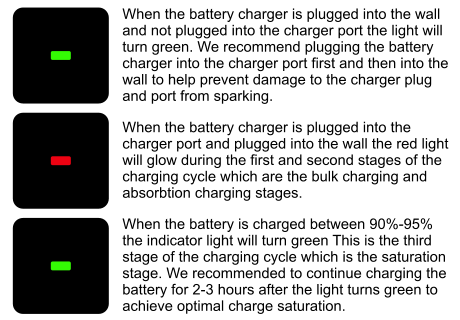