started a topic over 7 years ago
I purchased two 1500 watt 48 volt electric scooters from Miami. The controllers & wires to them burnt out in less than 5 days on each one. I sense the controllers are not properly paired with the motor but I'm not expert (but I am somewhat mechanically inclined). They were used on hard mowed grass road surfaces and not soft roads/trails.  Any comments would be appreciated from your scooter experience. I beleive the scooters are physicially well built (beyond the motor/controller) but there is something relative to the controller/motor that may not be in sync. The seller is sending me two controllers assuming the motors aren't damaged but what will preven this happening again?
Robert

Can you insert a photo of the scooters so I can see what they look like? A photo of the old and new controller showing the burnt wires would also be helpful also.

Do the scooters or original speed controllers have any indication of how many Watts they are?

said over 7 years ago
I assumed that it was a larger street legal scooter with a brushless hub motor because that is what most 48 Volt 1500 Watt scooter are. I can not tell for certain if it is a brushed or brushless motor from the photos in the Amazon listing though. Brushed motors have two wires, and brushless motors have between 7 and 8 wires.

Do you know if the motor on the scooter is brushed or brushless?

said over 7 years ago
It is definitely a brushless motor.  I sense the controller is under configured.  If you look at the photo below on ones side it states its 48 volt but on the other is a 37 volt designation.  Not sure what each implies but having two of them go the same implies that its a controller issue and it may actually be 37 volt.  I had forgotten that I photographed the controller prior to  sending it back so that I would know how to reconnect tha many terminals.

It looks like all of the heat was produced around the bullet connectors between the motor and controller. It is likely that these connectors did not have a tight enough fit for the amount of power they were carrying and there was arcing inside of them which caused them to overheat and melt their insulation.

Usually a connector failure like this does not burn out the motor or controller but it looks like in your case the heat from the bad connections traveled down the wire and overheated the controller.

For the next controller install I recommend soldering together the thick wire connections between the motor and controller and insulating them with heat shrink tubing. That way there will be no possibility of a connector failure happening again between the controller and motor.
. 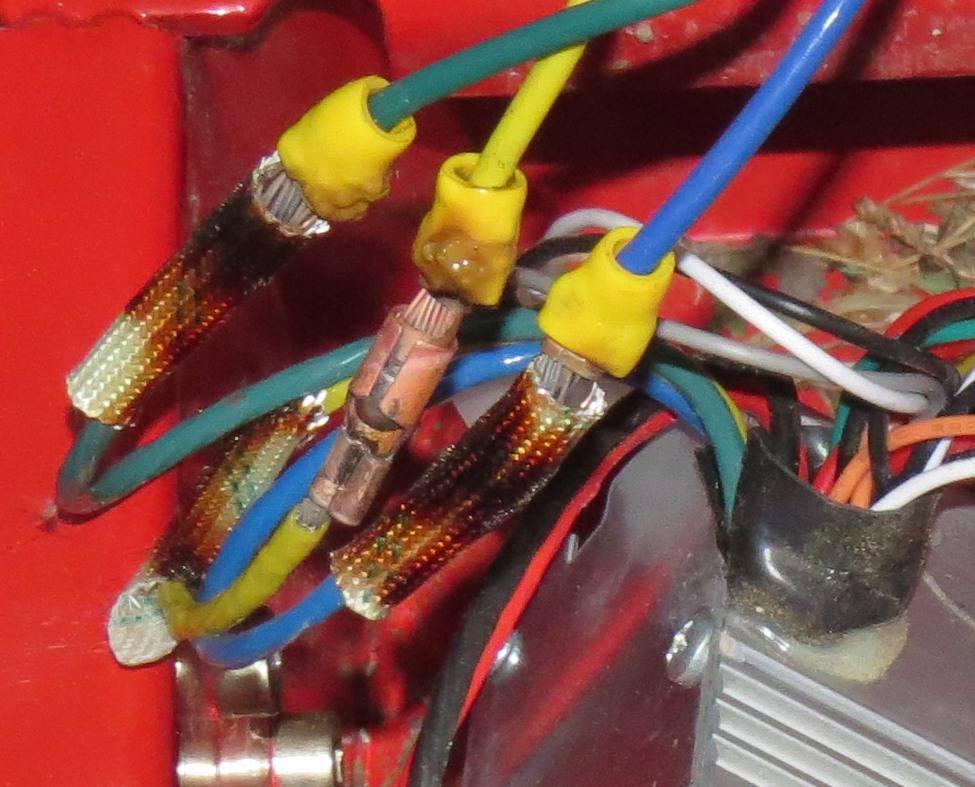 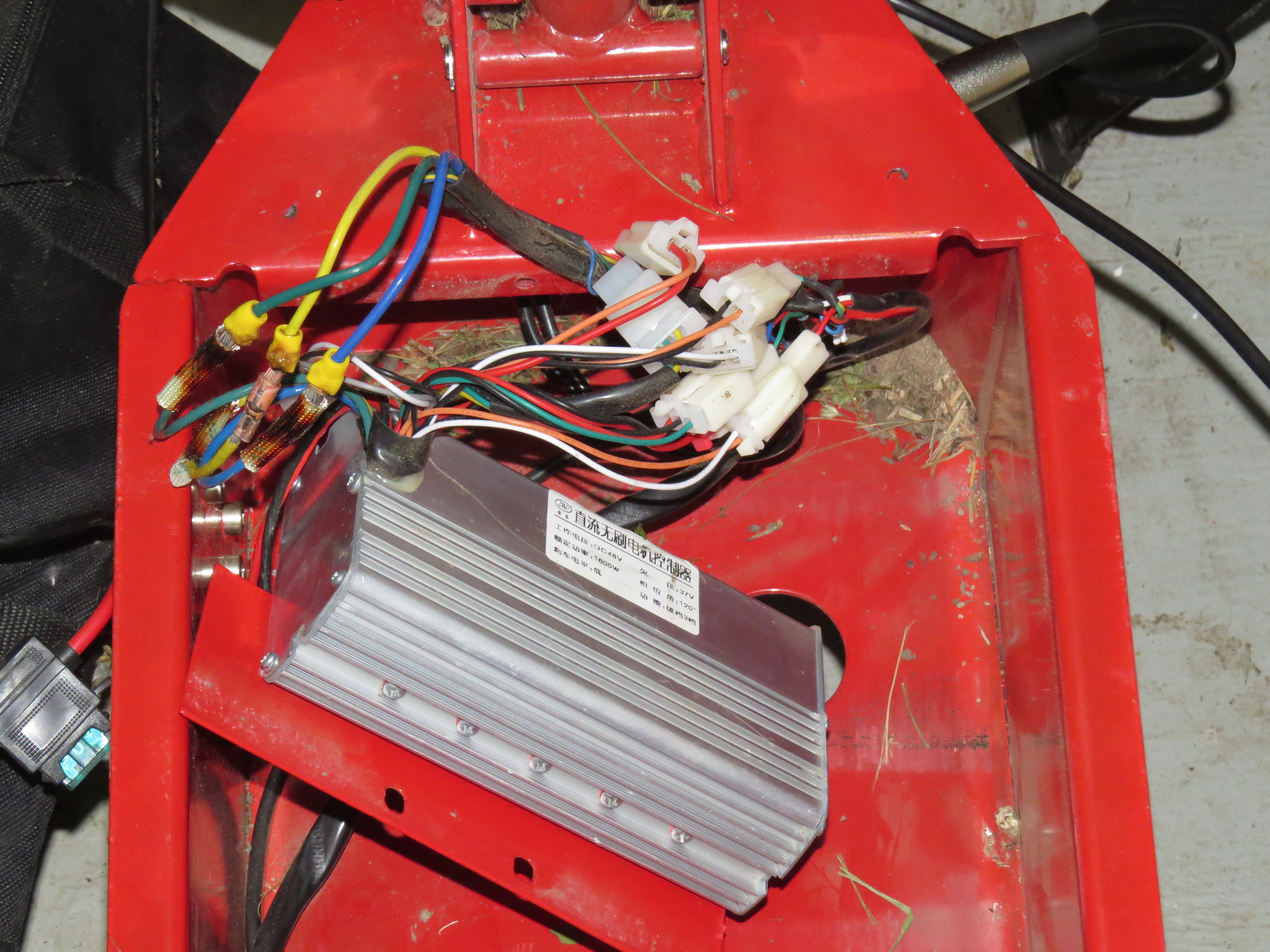 said over 7 years ago
I have two of these and the three motor wires you reference historically get very hot and even have a very protectivehigh temperature wire insulator around the connections.  The seller stated that it was common and I have to agree as I saw it on the blue scooter.  I question whether I should solder or pehaps use a better connector liike a compression type (two wires go through and a screw compresses both of them - not sure of the name of that gadget). With such heat I think soldering would just come undone. But thanks for the clarification of the 48 vs. 37.

said over 7 years ago
Solder will not come undone even if the wires get very hot because it has a melting temperature of 361 degrees, and the melting point of most wire insulation is around 200 degrees. So the wire insulation would melt off the wires and short circuit them long before the solder could melt and come undone.

You definitely could use other methods of connecting the wires together which would work for the application, however none of them would be as reliable as using solder. That said, if you do not already own soldering equipment and supplies then using a connector is probably the best option. The type of connector you are referring to where the wires are compressed by a screw is called a euro terminal connector.

said over 7 years ago
Well, that being the case, I 'll give it a try as I do have a number of solder stations, guns & torches.   And I have to agree that the bullet connectors probably do not offer as much of a connection as would a good crimping, terminal connector or soldering.

A replacement controller came in today and it didn't work in either scooter.  I think I'm going to have to go this alone as the seller offers little help.  I have one more coming in Monday and then its decision time.

A Euro Terminal Connector - I knew the device had a name.  Thanks for the suggestions and help.

said over 7 years ago
I think you hit the nail on the head with soldering the connections.  Replacement No.1 controller (Red Scooter) arrived and did not work. It was sent back.   Replacement No. 2 controller (Blue Scooter) did work.  I'm going to solder the connections as suggested to get a better connection.  Perhaps, they worked lose before, were poorly connected, or whatever.  But its a good idea to limit the possibility of it happening again.  Plus, I'm going to go easy on the scooters despite that you should get 10-12 miles on a charge.  Will keep it to 2-3 miles and see hot everything get.  Thanks for your assistance - its greatly appreciated having $1200 tied up in both scooters.  Despite the problem I had, I still think they are extremely well built for adult riding.

said over 7 years ago
I always used to install crimp connectors or bullet connectors for vehicle wiring connections. But then after watching a few reality television shows about custom building cars and bikes I noticed that the best mechanics always use solder and heat shrink tubing for their wiring connections. So now that is the way I do it. I think that soldering makes the difference between a good connection and a great one.

said over 7 years ago
I have to agree and already soldered them securely.  Now we'll see if the same problem occurs.

I isolated the problem to weak wire connectors on the two scooters and now they are both working fine. Soldering or better yet using terminal blocks to connect the controller/motor wires did the trick. Being more familiar with them now, and being able to get parts from Miami, I'm glad I stayed with them as they are absolutely terrific off-road scooters. We us them in a rural setting on gravel roads, paved trails and ATV trails. Having the larger tires 12" rim tires (actually 16 inch diameter tire) they ride very nice. We also have a 1600 Watt 48 volt Uber Scoot. Its nice, reliable, but gives a bumpy ride. Whereas the Hyper-Racing 1500 Watt 48 volt off-road scooters ride exceptionally nice. This is a scooter designed for adults. So now I'm all set and appreciate all of the recommendations and assistance passed on to me.

Robert, This information is priceless and instrumental. I own the exact scooter, it did the exact same thing. I've spent countless hours troubleshooting and researching finally this helps solve the issue for me! (I hope) I'm going to solder them directly and give it a shot. Again, thanks and feel free to show me how your scooters look now after you soldered the connection. I'm in Coconut Creek and i use mine to hit all of the local parks with my Wife & Daughter and they ride the EVO 100 but i stepped it up to a T-Walker 1500 y Hyper Toys because i weigh 220 Lbs.

said about 7 years ago
Bert, where soldering worked it was a pain when I wanted to remove the controller to check it.  But it did work well. I think a good terminal block for wire connections may be better.  Rick has them.  Once I got past this very frustrating problem I got five of the 1500 watt scooters. The 1500 watt scooter is plenty powerful as I see they are now selling the 2000 watt 60 volt scooter.  I don't need that kind of power and I'm a little below your weight.  Just two days ago the same problem occurred with the Euro Style terminal block.  It heated up and melted many connections.  So I need a better terminal block.  Rick was to send me one but never followed through so I'm still hunting for one.