started a topic about 6 years ago
Hi there guys, and thanks in advance for taking the time to read this! I have an HCF Pacelite 707 and I think I need a new controller. When I turn on the scooter now (using the lower on/off switch by the battery compartment) the motor runs at full speed, whether or not the upper throttle on/off switch is on. And activating the thumb throttle does nothing either...in fact I even disconnected the throttle wire but the motor still ran at full speed. The scooter was running perfectly until the other day when I stupidly tried to wire a third battery in series with the two stock batteries that Pacelite comes with in order to get more power from the scooter...I've read of other Pacelite 707 owners who successfully did this. At first, when I wired the third battery and then turned the scooter on, there was no response from the scooter at all, as if there was some sort of fail-safe built in to the controller that would prevent this sort of third-battery wiring from working. After continuing at it for awhile, the scooter's motor then turned on full speed as described above. And this happens even when reverting back to the correct two-battery setup and wiring that the Pacelite is supposed to have. The scooter is 24v and 350 watts. So, two questions: If I did indeed fry the controller, do you guys know of a proper replacement controller for sale, one that would have the same wiring and connectors? And second, would upgrading to a 36v controller allow me to safely connect that third battery like I had attempted in order to get more speed and a longer run time? I cannot seem to find an original Pacelite 707 controller anywhere online, which isn't all that surprising since I know these Pacelites have been discontinued for some time now. But I'm determined to revive mine as it's one of the best scooters ever made and you don't see them on Craigslist that often anymore. Thanks again so much for any help you guys can give me! --Bob
jpg
146138621420...
(2.23 MB)
jpg
146138614643...
(2.11 MB)
jpg
146138606411...
(1.88 MB)
jpg
146138551733...
(1.7 MB)
jpg
146138541432...
(1.65 MB)
jpg
146138539191...
(1.58 MB)
jpg
146138537010...
(1.64 MB)
B

said about 6 years ago
Also I'd like to replace the stock on/off switch next to the battery compartment with a keyed switch. Seems like that wouldn't be too much trouble and I'm sure I can order one from your website. 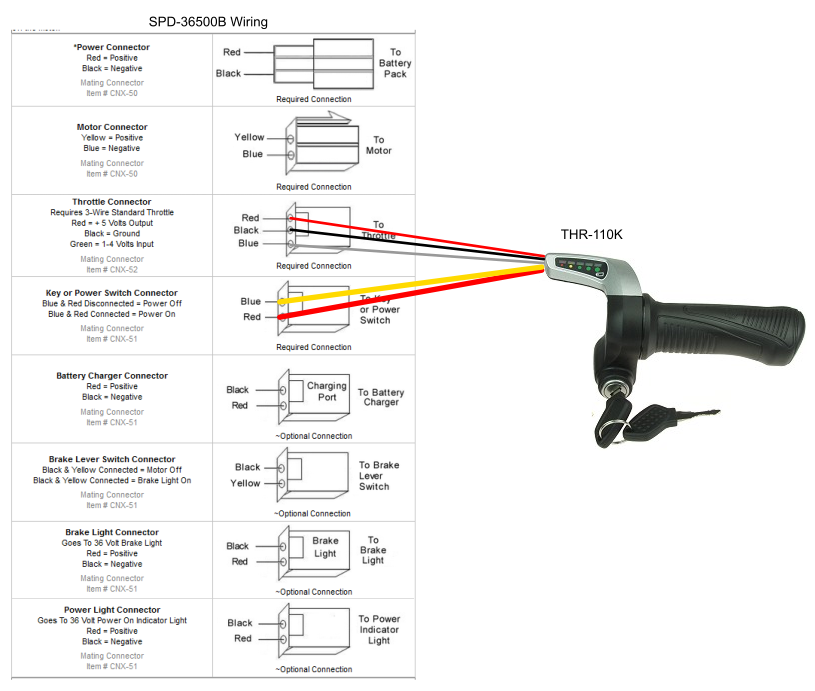 The Pacelite 707's motor has a built-in thermostat which will not connect to the new controller. The motor thermostat wire can be left disconnected when installing a different controller. 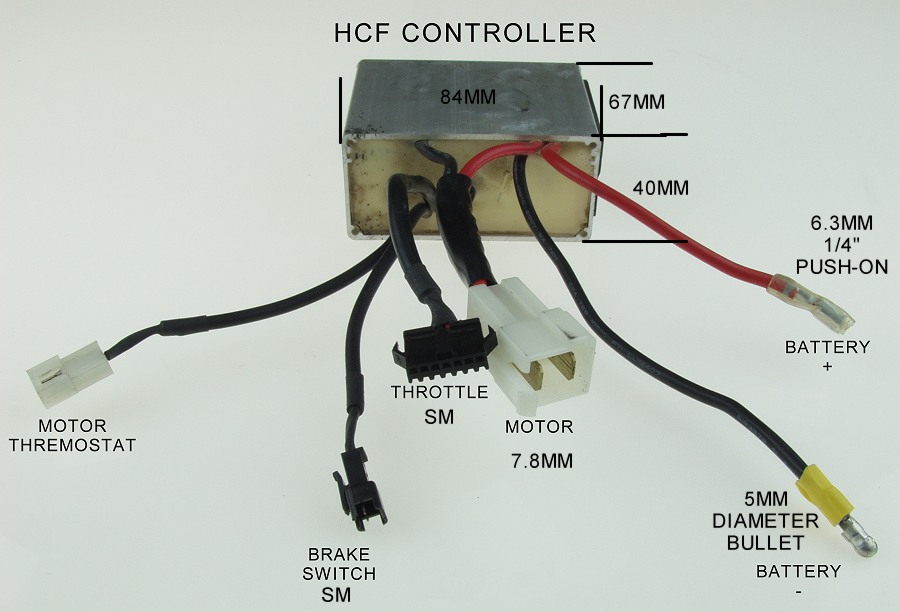 Please let me know if I missed any questions or if you have any further questions.

said about 6 years ago
Wow...thank you tremendously! I definitely would like to order the 36v controller that you recommended as well as the keyed throttle. Would I still be able to use the original HCF motor?

Yes the original HCF motor can be used with a new 36 Volt controller and throttle, however it is a 24 Volt motor and if it is ran at 36 Volts on full throttle then it will produce more heat than when it is running at 24 Volts at full throttle.

If you upgrade the scooter to 36 Volts then I recommend not running it at full throttle all of the time and only doing so occasionally when really needed. For high reliability I would keep the scooter at 24 Volts and use a SPD-24500B controller and THR-105K throttle instead of a SPD-36500B controller and THR-110K throttle. However if you want to modify the scooter for high performance then upgrading it to run on 36 Volts is the right direction to go.

said about 6 years ago
Sounds great, and thanks so much again! I'll order those parts and let you know how it all turns out.
S

I have the same scooter and need a replacement motor. I have searched for a while but only found one on Ebay that was way over priced. Is there a suitable replacement or alternative motor that would work?

Hey Guys, If you are interested in selling your scooters give me a shout.  I wish these were still being made :-(

said over 4 years ago
Hi Sean, sorry that I missed your question last month. Direct replacement motors for HCF scooters are discontinued and no longer available. You might be able to get the motor rebuilt though as there are many shops that repair and rebuild low Voltage DC motors. I am not sure where you live so I am only posting this DC motor repair shop as an example: http://www.electricmotorrepairmesa.com

If you search Google for 'dc motor repair shop' many more shops will appear in the search results.

Another option may be to custom install a modern electric scooter motor however I can just about guaranty you that this would not be a simple motor swap job and would require quite a bit of modifications and parts sourcing.

If you change your mind about repairing the HCF-707s, let me know.  I will pay $500 for a non working scooter that is in good physical/mechanical condition.

said over 4 years ago
Its in good condition. I can send photos.
D

Hello. I have all the parts. I even found the charger for it yesterday. It is the Polaris branded Pacelite. Gunmetal grey with the Polaris logo on it. I really want to fix it up and use it with my son. He has an electric razor scooter and Ive been looking for a replacement motor for it. I would be willing to reluctantly sell it for $500 and totally understand why you want the frame. Its an amazingly well built sturdy frame. Ive owned a few gas scooters before and this is a much better build then them. I am in Minnesota. Where are you located? I created an account, logged in and tried to send you this message but it said it didnt go through.

said over 4 years ago
Hi David, we can privately send Sean your email address if you would like? - ESP Support

Absolutely, that would be great if you can do that!