started a topic over 6 years ago

My son has a crazy cart that he got for Christmas last year, so almost 8 months old. I believe it is version 5, but not positive.  It has run great and then last week it just stopped working.  Nothing happens when he hits the gas.  No click, nothing.  Both batteries a believe are charged.  I have taken it apart and see not wire damage, and every thing is connected.   I have a voltage tester, but I really have no idea of where to put the leads on to check for anything.  I was thinking it might just be the control module.  Any help would be great.

If the power switch lights up when the switch is on then the next thing I would do is test the switch for continuity to make sure it is working. This could be done with a multimeter set to Ohms by removing the two red wires from the back of the switch and testing the switch leads for continuity where the red wires were removed from. Make sure to mark which red wire goes to which switch lead before removing them because they will need to go back onto the switch exactly where they were removed from. The same test can also be performed without a multimeter by removing the two red wires from the switch and bridging them together with a jumper wire and seeing if the cart works then.

If the fuse and power switch both test good then the next step I would take is to test the motor to make sure it is good and does not have a broken wire underneath the wire insulation. The motor can be tested by unplugging it from the controller and momentarily jumping its leads to the Crazy Cart's battery pack, or to a 12 Volt automotive battery charger (however do not use the Crazy Cart's battery charger to test the motor or it could be damaged). 1/4" push-on connectors which are available at auto parts and hardware stores can be used to make jumper wires for testing the motor. 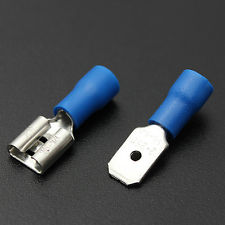 If the fuse, power switch, and motor all test good then the problem has to be either the controller or accelerator pedal. Both of these parts could be replaced at the same time to eliminate any further testing, or the accelerator pedal could be tested to determine if it is working or not which will indicate if it or controller is faulty. 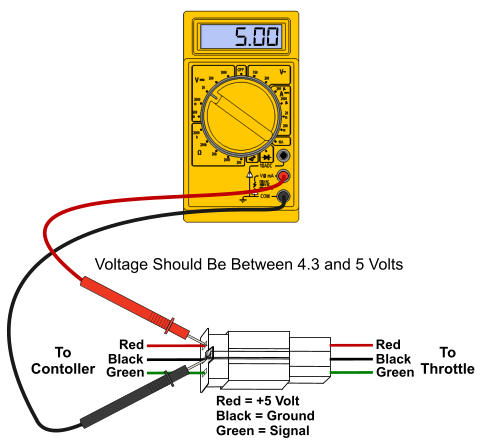 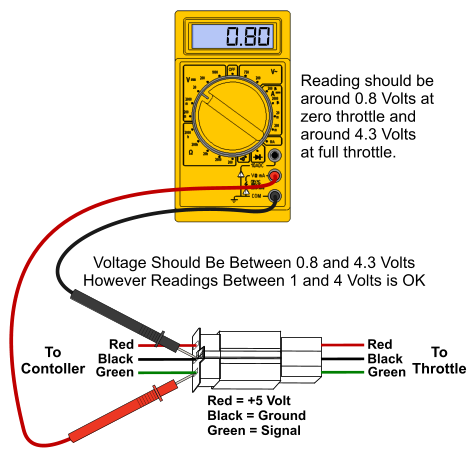 If the controller does not have a 4.3 through 5 Volt output to the throttle then the controller or one of the parts connected to it such as the power switch, fuse, wires, or connectors is faulty.

Thanks, great information.  I will check this out today.

You are welcome. Please let us know how it goes.

said over 6 years ago
The motor should run when connected to the battery pack or a 12V automotive battery charger. If the motor does not run then it is the problem, however most likely only one of the motor wires is broken and the motor itself is not bad.

The motor is a very common part to fail on the Crazy Cart, which is why I recommend testing it early in the diagnosis process. However usually the motor itself works and only a motor wire is broken and needs to be repaired. The motor wires are subject to an extreme amount of flexing when the steering wheel is turned back and forth and one of them may eventually break underneath their flexible plastic insulation. The broken wire can often be fixed with an automotive wiring crimp connector for an easy repair. Some people choose to replace the entire wire between the motor and connector with a thicker or more flexible wire to help prevent it from breaking so soon again. However a quick repair with a crimp connector and then wrapping electrical tape around the wires to make them stiffer usually does the job. To determine where the wire is broken the plastic covering around the wires, or on some newer models the spring around the wires, will need to be removed or pushed out of the way so the individual wires can be accessed by hand. Then the wires can be bent by hand up and down their length to determine where the broken wire is. The break in the wire will have much less resistance to bending than the good sections of the wire so it will be easy to determine exactly where it is.

Please let us know if you have any questions, and how it goes.

I went back and checked the motor and it ran, so thats good.  One thing I forgot to ask.  I unhooked the two red wires to the switch to check the switch and I lost track on which one went where.  Is there a way to figure out which goes where?  I am now going to test the accelerator pedal and the controller.  I have a volt meter, I am just not sure what to set it on while testing both of these.

Most multimeters have a 20 Volt DC setting which is the best setting to select for testing throttles. The range of DC Volt setting on most multimeters are depicted with the following symbols:

I'm jumping into this thread since my son's cart has almost identical symptoms. Facts so far:

- Was running fine, then not ridden for ~2 weeks. Now it is dead.

- Charged over night, and charger shows green light as if fully charged.

- Power switch lights up when on

- Power off of batteries with power switch off is 26.9v

So far so good. But then things get interesting:

- Power off of batteries drops to ~5.5v with power switch on

- Red/black wire voltage on controller side of throttle connection is ~2.3v (with power switch on).

Seems like either bad controller or bad battery pack. Any ideas where to go from here?

I was planning on just ordering the accelerator pedal and the controller, but it looks like they are out of stock.  Any idea when you might get these parts in?

I just checked and the Razor Crazy Cart version 1-4 throttle, controller, and throttle plus controller kit have been discontinued by Razor so we will not be able to reorder them. The version 5 and up throttle, controller, and throttle plus controller kit are still available however they are sold out and on back order. I do not have any official word from Razor when they will be back in stock however I expect them to be in stock again within the next month.

I can sign you up for a back in stock notification email for the version 5+ kit if you would like?

said over 6 years ago
I am a old Noorwegian man, two handicap is mented, but it is a very fin service from ESP Support,
I silly old man can understand al thing. Thanx  Erling.(82 years)

Ok, I have been busy, and just now getting online.  I ended up ordering a new controller and throttle.  Once I hooked them both up I tested and the crazy cart worked.  I started putting it all back together and tested again and NOTHING!  I would wiggle some wires and push the throttle and it would work.   Then let off the throttle and NOTHING.  I did not move anything and it would not work.  I went though, and would move each wire and sometimes I could get it to work, and then sometimes not.  Each time the cart would work I would let off the throttle and then push it again, and nothing.  Again these are brand now throttle and controller.  I am not sure how to find out what is going on.  My son really wants to ride!  LOL

This type of intermittent power problem with a Razor Crazy Cart is almost always due to a broken motor wire because that is usually the first part to fail.

On newer Crazy Cart versions there is a spring over part of the motor wires and the wires can break under this spring, so the spring needs to be removed or pushed out of the way to bend test the wires underneath it.

If it winds up that the motor wires are not broken then the problem could be caused by another wire that is broken, a bad connector or fuse holder, or a bad wire connection to a battery. Chances are extremely high that the problem is with a motor wire though.

One more thought is that version 1 and 2 of the Crazy Cart have a safety button located underneath the steering wheel. If it has this safety button then checking it for proper operation and making sure that this button's wires are in good shape and not shorting out against each other would be a good idea.