This forum is in read-only mode. Please continue to browse, but replies are disabled for now. Why?
Discussions Question and Answer Forums Electric Scooter, Bike, and Go Kart Built From Scratch Forum

It's kind of difficult to explain.  Basically I want to turn a 15ft camper trailer into a front wheel powered trike.  It can be have up to 750 watt motor and top speed of 5 mph across flat sometimes soft dirt.

This is the last setup we used.  Side by side bicycle geared as low as possible all human powered and was increasingly difficult and had limited range. 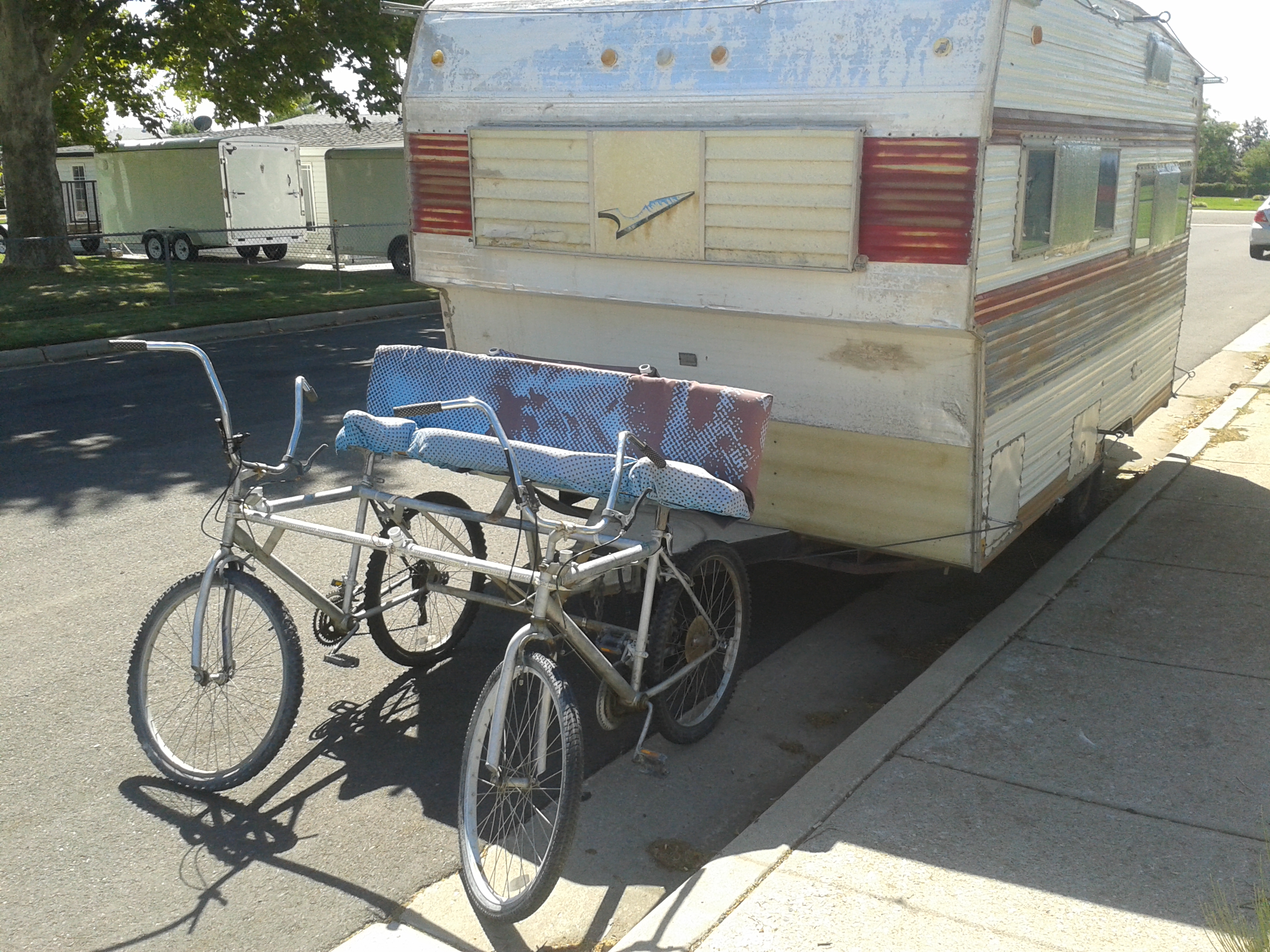 What I have in mind is something more like these. 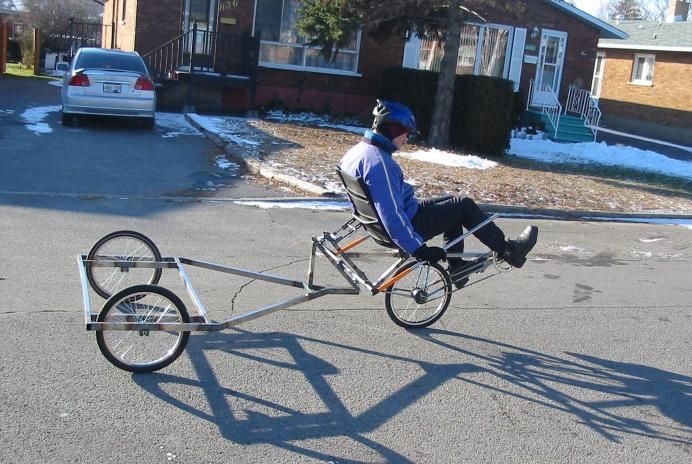 Except with a fatter wheel.

I'm no engineer so I'm not really sure if this is even possible, but I figure if two humans on bikes can tow it, then one with an electric motor should be able to with the appropriate gear ratio.

I been trying to figure out the best motors and sprockets, with the help of your calculator, to get the most torque, but I'm really new to all this.

Any thoughts or ideas are greatly appreciated.

Also I have a 3000 watt generator on-board already so I could use a AC motor and cut out the need for a DC power supply.  I just have no idea where or what to look for when it comes to a motor.

Here are my initial thoughts after looking around for a while.

I also wouldn't be opposed to figuring out how to add a pedal crank to the middle sprockets to add some human powered torque to help get it started moving.

Using your 36 Volt 650 Watt Planetary Gear Motor (Item # MOT-36650PL) to a 34 tooth sprocket (Item # SPR-42034) on a 9" rim (Item # WHL-9x3.5-4R). This gives us a top speed of 4.19 mph and a gear ratio of 20.4. This also seems to fit my criteria fairly well. Using a less powerful motor we get a little slower mph than option one, but even a higher gear ratio and remove the middle gearing sprockets of option 1. Still unsure if the high gear ratio would generate enough torque to move such a large vehicle, as there are no torque figures for the motors.

These options seem to have a correlation between less power and higher gear ratios.  I like the idea of not having to create my own middle gear sprockets but it really comes down to what would have the most torque to get the job done.  Anyone have any thoughts or feedback?

said almost 5 years ago
I think that a 15 foot travel trailer could be propelled with a 650 or 750 Watt motor as long as the top speed was geared low enough and the terrain was perfectly flat.

The gear motors would be best suited for this type of job because they have sprockets for #420 chain and they have built in gear reduction so a jackshaft would not be needed. However the 750 Watt motor is more powerful so if it was used with a jackshaft to keep the top speed low then it would produce more power than the 600 or 650 Watt gear motors. If a jackshaft was used then the secondary chain that goes to the wheel should be made with a heavy gauge chain such as #420 so it can handle the increased torque that the jackshaft will produce.

The geared motor option does seem the simplest.  I just want to make sure it will be powerful enough for the job.

said almost 5 years ago
This sounds like it might be a Burning Man vehicle to me and the front wheels of those bicycles look like they have some playa dust on them. We have helped countless other BM attendees with selecting and acquiring their electric vehicle parts.

The wind is going to be something that is a significant force to consider. A 20 MPH wind force on the front of that travel trailer could easily generate 1 horsepower of resistance. If you plan to use the vehicle in strong headwinds then the size or number of motors should probably be increased. A 750 Watt motor has around 1 horsepower so if only it was used then a strong headwind could bring the vehicle to a stop. To combat strong headwinds two motors could be used instead of one. If the motors were connected to the drivetrain with freewheels then one motor could be used for normal conditions and the second motor could be turned on when there are headwind conditions.

#420 sprockets are a common size used on go-karts and mini-bikes so you will be able to find a wider variety of them than we carry at any online go-kart parts store. Go-kart and mini-bike parts stores will also have jackshaft kits and parts. You should also look at their axles and wheels as these will work with their sprockets. We custom makes sprockets if you need a size that is not commercially available. We can make sprockets with practically any number of teeth and any size center hole and mounting bolt holes. Here is a link to our custom-made sprocket page:
https://electricscooterparts.com/custom-made-sprockets.html

You are correct it is for my Burning Man installation the Electric Lazy Lounge.  A little background, for years it has bounced between the two regulating entities of BM the "Artery" and the "DMV".  Last time we brought it out in 2016 both entities denied it mobility, which is why we biked it. So the goal now is to fit into their electric bike category which is unregulated if it is 3 or less wheels, 750 watts or less, and partially human powered.

So although, I would love to add another motor to help fight the wind that would put us over the 750 watt rule. That's why I'm leaning towards the jackshaft option with pedals.  That would allow the larger motor, some human power, and high gear ratios.  I'm sure there will be times that the wind will overpower this setup so at those times we will just have to wait it out.

I'm currently putting together a build team to look over what we have discussed here.  I will also look into some of the other #420 sprocket sizes and see what kind of gear ratios I can work out.

Thanks for your help.

said almost 5 years ago
One more thought I have would be to use two MOT-24350G 24 Volt 350 Watt gear motors along with SPR-B1211FW freewheel sprockets. SPR-B1211FW freewheel sprockets work with standard single-speed and multi-speed bicycle chain. This would give you 700 Watts of power to keep under the 750 Watt rule and since these motors would have freewheels on them they could be placed directly onto the same chain that runs between the pedal sprocket and the wheel sprocket, or they could run with a second chain to a secondary pedal sprocket which would give you more gear ratio options. This would keep the drivetrain very simple and inexpensive. The freewheels would allow the bike to be pedaled with the motors off without any resistance from the motors. The wheel would just need to have a large sprocket on it such as one used for hill climbing to keep the gear ratio low so all of that weight could be pulled by the pedals and motors. 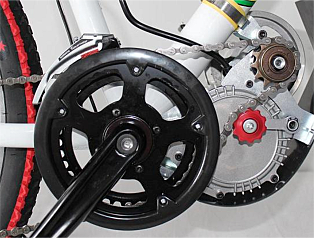 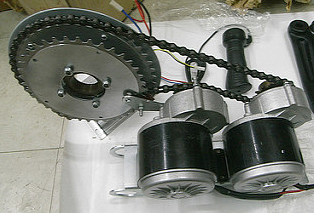 Login or Signup to post a comment
More topics in Electric Scooter, Bike, and Go Kart Built From Scratch Forum
See all 200 topics