Getting no power to the throttle

started a topic over 4 years ago
I am unable to get any power to the throttle. I recently purchased a new module and throttle an still no lights to throttle. Have brand new fully charged batteries and fuse is good. Disconnects the brake and nothing. Motor runs when hooked up with wires to batteries.
A

said over 4 years ago
This is on a razor ground force drifter cart!

Since the throttle has no indicator lights coming on that usually indicates a problem with the power system.

The first thing we would do is test the Voltage at the connector shown in the wiring diagram below. If there is Voltage where the red arrows point then that confirms that the battery pack wiring harness, fuse, and fuse holder are good.

Then we would test Voltage where the blue arrows point. If there is Voltage there then that confirms that the battery pack wiring harness connector and controller connector are good. 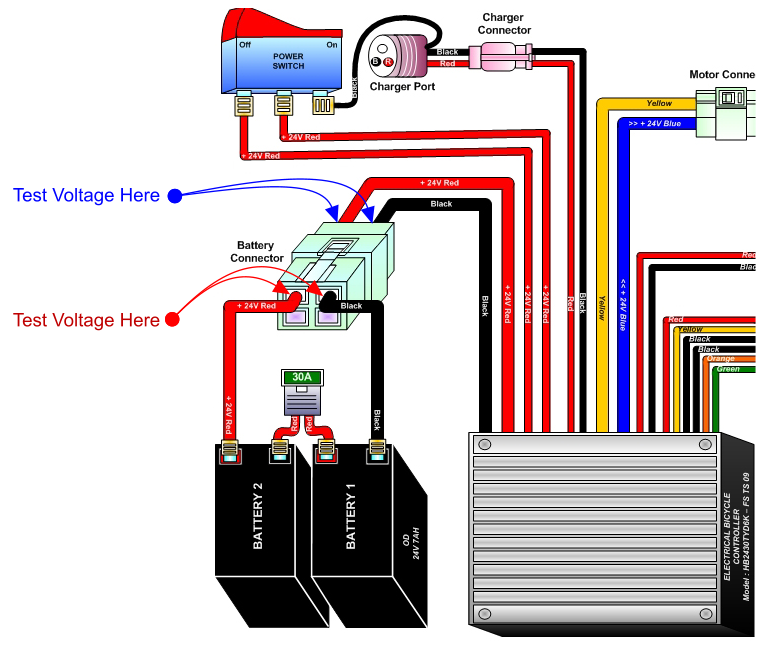 Next, with the power switch on and throttle in the full throttle position, we would test the Voltage of the battery pack. It should have 27-28 Volts during this test, and if it has under 23 Volts then that indicates a problem with the battery pack or charging system.

If the charging system tests good and the battery pack drop under 23 Volts when the power switch is on and the throttle is fully engaged then that points towards a faulty battery pack.

If the throttle's indicator lights did light up, however, the motor did not run then we would test the throttle using the test described in one of the attached files.

If the charging system, battery pack, wiring harness, fuse, fuse holder, connectors, power switch, motor, and throttle all tested good then that would point towards a faulty controller.